Last week I blogged about the books that were ready and waiting for me to read on my Kindle. Those books are on hold while I finish my paperback To Be Read (TBR) pile. And that pile is getting smaller.

I keep MY books (aka smut books) in my closet. It started last year as a half a shelf. My first 2 series were Black Dagger Brotherhood by J. R. Ward and the Psy/Changling series by Nalini Singh. Both were only a few books (5-6) and so I didn’t have to move much around to accommodate. In addition, I had a few Buffy Season 8 and Angel After the Fall comic books. Fast forward a year later and I’ve collected more books and comics. Here are some examples of my closet now: 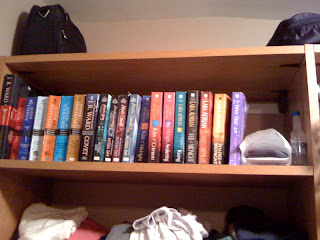 Notice the empty bottle of Grey Goose for my man Vishous there! 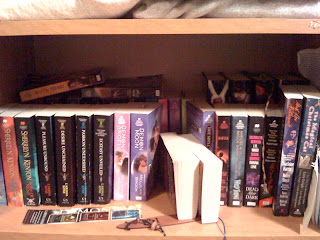 So, in all that mess of books (not all are shown), what do I still have left to read? Answer: NOT MUCH…

First up: As I have blogged about previously, I am currently reading the Guardians Series by Meljean Brook (http://meljeanbrook.com/). The series has 5 full-length novels and 4 novellas in different anthologies. I own all of the books. I am currently reading the 7th story: Demon Bound. It is an amazing series and I hope to write more on it at a later date.
Next up: Sherrilyn Kenyon’s re-released “The League” series. (http://www.sherrilynkenyon.com/). Currently it’s a 3-book series. I own all three and am looking forward to reading them. From Ms. Kenyon’s website:
Hell’s New Heroes In the Ichidian Universe no one was safe. People were dragged from their homes and killed in the streets- victims of a ruthless tyrant who was bent on being the sole

ruler of their entire empire. Those who opposed him and his army formed an alliance called The League which fell under the leadership of the Quorum. The Quorum realized that the best way to keep trouble from starting was to cut it off at its knees. So a separate group of soldiers was needed, The League Assassins. Highly trained and highly valued, they are the backbone of the government. But not even the League is immune to corruption… Welcome to a world where corrupt assassination politics dominate everything and everyone- because sometimes the cure really is worse than the illness. It’s kill or be killed. You’re either the hunter or the prey. But there are those who will protect you. Men and women who come from the streets and from bloodied backgrounds of survival. You just have to decide is they’re better than the ones chasing you… Or worse. Sarcastic, loyal, highly trained and lethal, these men and women are the next generation of heroes. They know how to laugh in the face of madness and danger, and to endure the worst The League and their enemies can hurl at them. Most of all, they know to fight and protect. Welcome to the madness…
And finally, after that I have the Elemental Witch series by Anya Bast (http://www.anyabast.com/). I have read a few novella’s by Ms. Bast and started her new series (Dark Magick Series – first book Wicked Enchantment, Jan. 2010). I really enjoy her work, so I picked up the first and third books in the Elemental Witch series at my local bookstore. It is a 4-book series. The first book is Witch Fire, released in June, 2007. From Ms. Bast’s website:
Mira Hoskins doesn’t know she’s a natural born witch who possesses the rare—and powerful—element of air. She also never expected to find herself tied to a mahogany bed frame, captive to a man who aches to fulfill her every desire and let loose the magick that dwells inside her…

Heat emanates from elemental fire witch Jack McAllister. The Coven, a governing authority of witches, has sent him to protect Mira from a band of warlocks who drain witches of power… and life. Long ago, he saw Mira’s parents murdered by this same dark magick. He’d like to quell his guilt and offer her everything she deserves. But she’s the long-lost cousin of his boss—making seduction off-limits.
With Jack’s strong guidance, Mira is luring forth her inner magick. But his sense of duty is quickly swelling into insatiable hunger. They warned him about the natural attraction between air and fire. Now he risks being consumed by the woman he shouldn’t want—but can’t stay away from …
I don’t know about you, but WOW – this one looks HOT!! Since I only own the 1st and 3rd books, I’ll probably order the other two on Kindle.
Finally… 2 years ago I started reading comic books. As a HUGE fan of both Buffy the Vampire Slayer and Angel TV series, I was sad when the shows went off the air. BUT Mr. Joss Whedon himself resurrected (pun intentional) both series in the form of comic books. I have a monthly subscription to both series. It took me a while to get used to the format of a comic book, especially when I was transitioning from a TV series. But I adore the books and look forward to reading them. However, it’s tough to only read one book every month or two, so I’ve collected a dozen or more and now I need to read them. That pile is indeed growing: 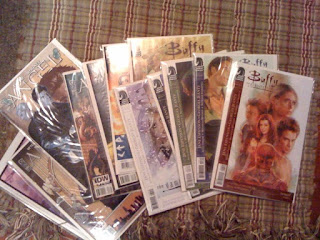 So now I’ve summarized what is in my hard copy TBR pile. What about you? What books are lurking in your closet, under your bed, on your night stand?

7 responses to “What’s In Your Closet?”