I recently picked up Sherrilyn Kenyon’s League Series, which I highlighted a few weeks ago in my blog. Today, I’m reviewing the first book in this series, Born of Night.

Command Assassin Nykyrian Quikiades was born and trained to slaughter. Refusing to be a pawn, he turned his back on the League and has been hunted by them ever since. Though many have tried, none can kill him. Now his assignment is to protect Kiara Zamir, a woman whose father’s political alliance has made her a target. She wants nothing to do with politics, yet she is forced to submit to protection or die.
And as her world becomes even deadlier, Kiara must entrust her life to the same kind of beast who once killed her mother and left her for dead. Old enemies and new threaten them both and the only way they can survive is to overcome their suspicions and learn to trust in the very ones who threaten them most– each other.

In this futuristic world, life is extremely harsh and many times cruel. The book setting recalls images of great 80’s sci-fi movies: Dune, Mad Max, and Blade Runner. Our heroes are the anti-establishment, hardened outlaws that have a heart of gold underneath the rough exterior.

Our hero, Nykyrian Quiakides has lived a life that was so cruel and so outrageous that we are told he trusts no one and expects that eventually even his best friend will turn him in for profit. Then there is Kiara, our priviledged, royal dancer that has a naive view of the world. Although she senses the good in Nykyrian, she is 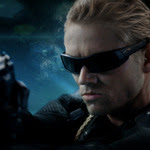 horrified by the choices he has made in his life. She cannot comprehend how someone would choose to kill and live as an outlaw assassin. He is determined not to get close to Kiara, and she is equally determined to show him that he can be loved.
The story of protection, war and assassins is good. Even though it has a lot of cliche moments, I was still glued to the book and wanted to know what would happen next. Scenes where Nykyrian is shot to death in front Kiara, yet he still lives seems box-office block-buster material: predictable action and adventure. But there were enough deviations from the normal to make the book hold my attention.

The writing is not as full and mature as Ms. Kenyon’s fabulous Dark Hunter series. These books were some of her first written (and were recently re-issued). The point-of-view changes frequently and without warning. While reading the first part of the book I would get confused at times, until I was used to the quick change in POV.

Another issue I had with the story was the constant self-degrading attitude and comments of Nykyrian. Yes, we know his life was harsh and he thinks little of himself, but we really don’t need for him to constantly remind himself that he is no good for Kiara. The inner monologue of both main characters gets very repetitive and annoying.

Luckily for the readers, they get over their emotional baggage and get together. Of course it’s amazing and true love. The ride after is bumpy and full of more baggage. They each make assumptions on what is best for the other and end up wrong at times.

And by the end of the book, it all works out – amazingly so. The fairytale ending of the story is somewhat at odds with the brutal beginning of the story. However, even with the cliches and issues I had while reading this book, I still couldn’t put it down. I teared up in a few places and felt my heart quicken for Nykyrian and Kiara. The bottom line is: the story works. Think of it as your summer block-buster movie ready for viewing. Pop some corn and pull up a comfy chair.
Rating: