Just one week until the newest Lora Leigh release from her Breeds series: 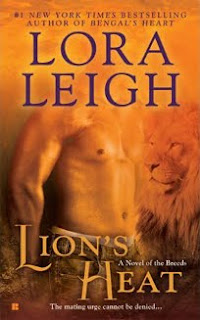 Bad boy Jonas Wyatt knows it is fate that Rachel becomes his mate. He can sense it. He can also sense her reluctance. But she has little power over the mating heat of the Breeds. It is Jonas’s destiny to claim her. And nothing will stop him from having his way.
For an except please visit Ms. Leigh’s website.
I’m a sucker for Lora Leigh’s Breed Series. I have an addiction. I’ll admit it. For the most part they are candy for my brain, and I keep going back for more.  There is a pattern to her books, a feel of familiarity, and it works. Not to mention, the sex scenes are incredibly hot. While normally I start a series from the beginning, this is one in which I did not — I started with Megan’s Mark, and I have read each subsequent book in order.
To celebrate the newest Breeds release, I want to highlight one of my favorite books from the series.

The runt of the lab she was created in, Dawn Daniels endured years of torture by her pride brother and the council soldiers. Finally freed from her torment, she’s now a Breed Enforcer, in control of her own life. Until she’s assigned to protect the one man destined to be her mate—and realizes it’s far too easy to lose total control…
One of the Breed’s most important supporters, Seth Lawrence has spent years trying to forget Dawn, knowing that her lost innocence has made it impossible for her to get close to anyone. But suddenly neither of them can find the strength to fight the overwhelming passion between them. At least until the most brutal tormenter from Dawn’s past reappears—and threatens to destroy their newfound love, along with their lives…

As I mentioned earlier, Ms. Leigh’s books tend to follow a pattern, but this book broke the mold.  Finally we have a male that may want to protect and dominate, but he doesn’t need to use sex as a method for control. In fact, Seth has waited 10 long years with a hope in his heart that Dawn will let go of her past and come to him.

Dawn has suffered unspeakable terror at the Breed labs, and she has never been able to shake the horror of her past.  She has risen in rank among the Breeds, becoming an enforcer, and always maintaining control. Even if that meant staying away from her destined mate.  But when confronted with the possibility of losing Seth forever, Dawn realizes she cannot fight nature any longer and gives in to her desires for Seth.
Oh and Seth does not disappoint. He knows he must take his time with Dawn – time they don’t really have. But he surprises Dawn with care and compassion. I love that he collected soaps from his travels, imagining her wrapped in the fragrance of each one.  It may be a chemical reaction that bring Breed mates together, but in the 10 years Seth has waited for Dawn, he’s learned that the physical desire isn’t the only thing that draws him to her.

9 responses to “Hear the Lion Roar”