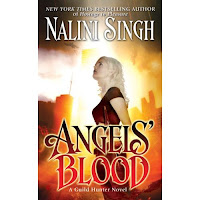 I want to start out by stating for the record: I *heart* Nalini Singh and her books! She is an amazing author. Her Psy/Changling series is in my Top 3 favorites and a must read/buy set. So just over a year ago when I saw that she was releasing a new series, I figured it had to be good. I was on vacation and found the closest bookstore. When I got there and the book wasn’t on the shelf, I made them pull Angels’ Blood from the back. I was NOT disappointed! I devoured the book in a day and from that point on was hooked!
Fast forward a year later and we have the second book of Ms. Singh’s Guild Hunter series, Archangel’s Kiss. This is the blub from the author’s website:

Vampire hunter Elena Deveraux wakes from a year-long coma to find herself changed—an angel with wings the colors of midnight and dawn—but her fragile body needs time to heal before she can take flight. Her lover, the stunningly dangerous archangel Raphael, is used to being in control—even when it comes to the woman he considers his own. But Elena has never done well with authority…
They’ve barely begun to understand each other when Raphael receives an invitation to a ball from the archangel Lijuan. To refuse would be a sign of fatal weakness, so Raphael must ready Elena for the flight to Beijing—and to the nightmare that awaits them there. Ancient and without conscience, Lijuan holds a power that lies with the dead. And she has organized the most perfect and most vicious of welcomes for Elena…

What I’m talking about:
The sophomore book of Ms. Singh’s Guild Hunter Series is a wonderful story. The continued examination of primary couple, Archangel Raphael and Hunter Elena, is sensual and fulfilling. It is a rare treat for a romance novel to focus on the same couple for more than one book. But it works for a couple of reasons. First: Elena and Raphael did not have a “happily ever after” of the truest sense in the first book. Yes, he saved her and did something so rare – turned her into an angel – that it only happens when an angel feels true love, but that was it… no “ever after.” Second: now that Elena is an angel, things in her world are very different, and how she relates to her mate changes, too.
What I love about this story is that we watch Elena learn how to use her new wings, develop her skills and study the way of the immortal. 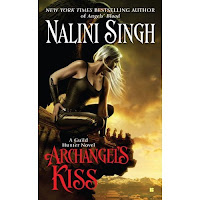 I love how Elena’s growth is “real.” She doesn’t wake up from a year of a coma and is able to walk out the door and fly. She has to struggle and we take that journey with her. In addition, we watch the love between Raphael and Elena blossom into something never seen in the world of the immortals. Each look, touch and kiss is amazing. Their relationship is truly unique and worth the extra time (a second book).
The overall story is interesting and full of action/adventure with great twists and turns. We feel for Raphael as he worries about his mate. We try to figure out what Lijuan is up to and capable of doing. In addition, there are some gruesome deaths and horrific (to the angel’s world) acts that occur, and Raphael is on a time crunch to figure out who is his adversary and how to prevent them from killing Elena. However, I felt the climax and ending fell short of Ms. Singh’s storytelling abilities. The climax was somewhat predictable and fell a little flat for me. This is the only reason I give the story 4 instead of 5 stars. Overall a wonderful book and worth a read (or two).
Rating:

And for a very fun glimpse into Guild Hunter #3, please visit Nalini Singh’s blog! You won’t be disappointed!

7 responses to “Kissed by an Angel”