Poseidon’s warriors have learned that the battle to protect humanity produces unexpected enemies–and alliances. But none more unexpected than the bond between a cursed Atlantean warrior and a woman whose sight surpasses any lie…
A warrior with no emotion …
Doomed by Poseidon millennia ago to live life bereft of feelings, Atlantean warrior Brennan’s curse is shattered when he meets Tiernan–a human with the ancient Gift of Truth Telling. Attraction turns deadly when the woman he could never forget becomes the woman he can never remember. With the fate of Atlantis on the line, will a warrior’s uncontrollable desire destroy the world? 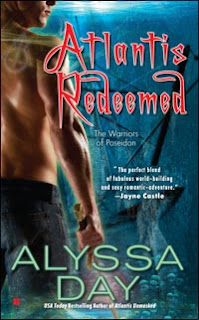 A woman with an eye for the truth…
Tiernan’s job as an investigative reporter is perfectly suited to her unique ability to see through any falsehood. But when she discovers human scientists conducting hideous experiments on humans and shape-shifters alike, only a wildly sexy Atlantean can help protect her from the those determined to see her fail—and die. When the future of the world is at stake, can she overcome death itself so together they can protect mankind?

Ah, a great addition to Alyssa Day’s Warriors of Poseidon Series.  We’ve watched dear Brennan suffer without emotions through four books and now he gets his chance to shine.  Atlantis Redeemed is a great combination of story line, action, love interest.

Brennan is a strong warrior who has been unable to feel any emotions for the past 2,000 years due to a curse placed upon him by the mighty sea god, Poseidon. Brennan remained a loyal servant for Poseidon all these centuries, not really believing the curse would come to fruition.  The curse states that when Brennan meets his one true soulmate that he is doomed to experience every emotion he missed feeling over the course of time since the curse was placed upon him.  This makes for an interesting character. I enjoyed the examination of Brennan’s array of emotions as they flooded into his being. Ms. Day did an excellent job transitioning from calm warrior to angry soldier to lustful mate.  This was especially rewarding for those who have followed Brennan throughout the series.

Another aspect of the curse is that Brennan is destined to forget his true mate when she is not in his presence.  This part of the story was not as strong. I was a bit disappointed that Brennan could fairly easily recall Tiernan once a strong enough emotion triggered a response and bring back some of his memories (like if she was threatened enough or when they kissed passionately).  However, the curse has more pieces to it and they all play out in the story to a happy ending.

In Ms. Day’s prior Poseidon books, the warriors carried on with “he-man” attitudes, especially when it came to their women.  Many times the conflict in the previous stories was due more to outdated male attitudes and strong-headed females than fighting the vampires.  So, I was happy to see that this “he-man” attitude was not as strong of a character trait for Brennan. Sure, he wanted to protect Tiernan, but he worked through his emotions and didn’t often play the MAN-card. And when he did, it seemed more out of genuine concern, rather than Atlantean warrior personality.

Finally, for those of you that have followed the series, there are some reveals about Quinn, Alaric and Daniel.

For an except of Atlantis Redeemed, please visit Alyssa Day’s website.

4 responses to “Review of Atlantis Redeemed”