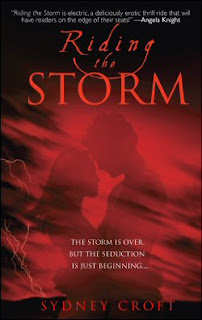 A storm’s rage. A woman’s desire.

A man with the power to set them both free.

He can summon lightning at will. Emerge unscathed from the center of a tornado. Strip a woman down to her barest defenses through the sheer force of his sexuality. He’s gorgeous, dangerous, and the target of parameteorologist Haley Holmes’s latest mission. Haley has been dispatched to the Louisiana bayou to investigate the phenomenon known as Remy Begnaud – man with a gift he never wanted: the ability to control a storm’s fury. But even a woman trained in bizarre weather phenomenon has no defense against the electrifying power of the Ex-Navy SEAL…a power his enemies would kill to control.

With her agency monitoring their every move, Haley’s job is to seduce Remy, gain his trust — and help him harness his extraordinary gift. But who will protect her from this voracious lover who’s introducing her to a new world of erotic thrills – a man who grows increasingly insatiable with each new weather event? Haley knows a big storm is approaching –and with it will come unexpected delights. But, so, too, will the storm unleash her greatest fears: An enemy bent on destroying Remy. And her worst fear of all…falling in love with this magnificent man, then having to betray him…

This book had me from the opening chapter. The chemistry between Remy and Haley sizzles like the lighting that strikes whenever they are in contact with one another. It was an enjoyable, sexy read. Great for the upcoming summer months!

Remy is full of anger and frustration at the “curse” he received from Mother Nature. To top it all off, he becomes sexually aroused when the storm rage near, which adds a wonderful, erotic nature to this story. Remy thinks he’s headed home after many years away to help his dad, but finds Haley in his dad’s home instead of his father. With a storm in full swing, Remy is forced to leave Haley or take her without control of his desires. This leads Remy to head out into a dangerous storm and Haley is compelled to follow. The results are a pleasurable read. *evil grin* The storms definitely add an exciting passion and element to the sex scenes.

But there is much more to this story. I enjoyed reading about the “side couple” of ghost-hunter Creed and electrified-girl Annika. I hope we read more of them in the subsequent books!

The authors have created a fantastic world, which we only get a few small glimpses in this first book. It feels like an adult version of the X-men with a group of individuals, all with special abilities, working together to keep the world safe from the “bad guys.” Big mystery surrounds ACRO leader, Dev. We know that he has a powerful ghost that haunts his parent’s estate, a mole within ACRO, and he is in love with someone that he cannot have. Dev’s character is complex and I will enjoy learning more about him. There is a scene in this book where the authors reveal some key information about Dev’s one true love. The scene is erotic and emotional. I loved it so much that I re-read it a couple of times.

I have already purchased the next 3 books from this series. I look forward to sharing them with you as I read them.

12 responses to “Riding the Storm”