DANGER IS THE ULTIMATE APHRODISIAC. 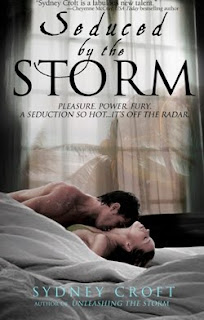 They met in a steamy Florida bar—then spent a night of mind-bending passion. Two secret agents who each possess unique telekinetic gifts—and whose combined sexual powers leave neither of them unscathed. For ex–Navy SEAL Wyatt Kennedy, assigned by the Agency for Covert Rare Operatives to the most treacherous mission of his career, the woman in black leather and lace has just become more than a one-night stand. Because Faith Black is the sole barrier to the success of his mission—and not even Wyatt’s legendary seduction skills can penetrate her deep cover.
Faith’s psychic gifts make her one of the world’s most dangerous women—but she hides a secret pain she shares with no one. Until Wyatt. And Faith has an agenda of her own: using her unique powers to save someone close to her—a move that pits her against a man she thought she’d never see again. For as a deadly hurricane is unleashed across the eastern seaboard, desire reignites between Faith and Wyatt, exposing secrets that thrust them both into harm’s way. With the hurricane sweeping closer—and their erotic hunger for each other growing—these two wary hearts must come together to heal, to trust . . . and to harness the power of a storm that could consume everything in its path.

I really didn’t think that I could like this series more than I already did, but this book pushed my love over the top! At first it seemed to me that I’d get another great story with new players. The action was exciting – a category 5 hurricane ready to slam into New York City… Our heroes must stop it!  The players are sexy and fun, each with their own issues and secrets.
But this book takes the normal way of doing things in a paranormal romance story and tosses the script out the window.  The play between Faith and Wyatt is wonderful. Each with a history of being hurt and each having to bare his/her soul in order to survive. And it doesn’t end there… They have to make life-altering decisions about the mission and their relationship, and what is unique to this series and this story particularly, is the characters don’t always take the path you would expect.
This book really picks up about halfway through when the couple actually retrieves the ITOR weather machine (a storyline from the previous two books) and gets away from the ITOR agents. What a twist – really… it’s always good guys vs. bad guys, but in this story, the main couple has to get through their own issues from the past to be together. I admit that a tear came to my eyes a few times before they finally got over all the hurdles. The emotional ride is worth the read.
But the story is so much better than Faith and Wyatt. For those that have read my reviews of the first two books, Riding the Storm and Unleashing the Storm, will know that I love the side stories that are so masterfully woven into these books. First up: Annika and Creed… We get some major break-throughs in this front. Annika must confront her past and work through her emotional barriers that she has always had in place:

“Troy… I f**king hate him. Hate is an emotion. It has to go.”
Creed sucked in a breath, and she heard him step back. “Jesus.”
“Yeah, you get it now. If I purge him, I purge it all. I get myself back.” She turned. “You opened some sort of door, Creed. You made me feel things I don’t want to feel. I want it to go away. All of it. Not just the hate.”
He shook his head, pain and disbelief swirling in the black depths of his eyes. “You really want me gone, don’t you?”

Their story is so touching and worth the time it takes to develop over three books.
And then… There is Dev and X (the name of his true love will remain unknown so that those that have not read the earlier books will not be spoiled).  Let me just say: OH. MY. GOD. There is a scene in Seduced by the Storm that now ranks in my top ten book scenes. It is so powerful. So full of just the right descriptions – scenery, emotion – oh, it is amazing. Their story is the true heart of ACRO, and well, I just don’t know where it will all go next. (Someone hurry up and read these books so I can discuss them with you!) I am quickly picking up the fourth book now!
This book is amazing. This series is worth a read. But in order to get the most from the books, you really need to start with the first one.  Go do it. Now.
My Rating:

5 responses to “Seduced by the Storm”