Feel the heat. Hear the roar.
The fever has begun. 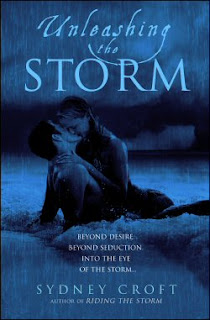 There’s a storm rising. Electricity crackles in the air. For Kira Donovan, it’s that time of year again: when the need floods her flesh, when almost any man—the bigger and the stronger the better—will do. For Kira, an animal psychic, the heat is a matter of life and death, and this year it has come at just the right time. Tom Knight, a natural born predator, has arrived at her isolated Idaho farm—for reasons all his own…
At first Kira isn’t interested in Knight’s motives. She only needs him—his body, his hands, his scent. But soon, through a daze of desire and distrust, Kira discovers Knight’s world—the world of a covert operative, one man among dozens of secret agents waging an astonishing global war. Knight’s mission is to bring Kira–kicking and screaming if necessary–into the Agency for Covert Rare Operatives and harness her extraordinary gift. He never expected the powerful emotions she would ignite in him, or the fierce desire to keep her safe from harm. For as darkness gathers around them, Kira is feeling the heat once again, leading them both on a wild ride of delicious thrills…and terror beyond imagining.

I wasn’t sure what to expect in the second ACRO book-the first was so exciting, and I always worry about sophomore books. Thankfully, Unleashing the Storm did not disappoint!
We briefly met Tommy “Ender” Knight in the first ACRO book, Riding the Storm. He was set up as the grumpy loaner, ex-military dude. And he remains that way into and throughout this book. He is attracted to Kira, may have some feelings for her as he gets to know her, but his personality does not take a 180-turn when he meets her. I like this.
Kira has some sort of tie to animals and occasionally exhibits similar behavioral patterns, including an annual “mating heat.” I’m not talking about the need for sex, I’m talking about the need for “seed.” We learn that she always has more than one male to service her and meet the demands of her high-frequency mating needs.  Unfortunately for her, her life is turned upside down when she goes on the run with Ender from the evil Itor agents. Kira is not happy and a bit scared when faced with the reality of only one man for her mating needs. She likes control and she has lost a lot over her own life and body. Of course, Ender is up for the challenge and secretly enjoys the fact that he can meet all her needs.
I enjoy the fact that both characters stay true to their nature. We don’t have an instant “ga-ga” reaction by either person when they meet or even after they’ve had sex. They secretly admit to themselves that there is an attraction, but they are realistic about their future together. I usually don’t enjoy a book where the main dividing force that keeps a couple from finally reaching their HEA is self-induced. You know – the whole “Oh, I can’t be with her b/c I’m no good,” attitude. But even though we get some of that in this book, it works. It’s not over played and we watch each character grow in time and on their own terms. It is a great ride to follow these two characters on their journey.
As for the “side” stories… I am in LOVE with Creed. When we left Creed and Annika in the first book, we knew that Creed had more than just sex on the brain for Annika. Early on in Unleashing the Storm, we get to see them together again. And this time, Creed isn’t going to let Annika continue to break his heart. Their story takes some interesting twists in this book and ends with an emotional cliff-hanger.
On to ACRO and its leader, Dev… What can I say? We get an passionate reunion with someone from his past. I can’t give details without spoiling the first book. Regardless, I’m happy to report that we get more details that surround the mysterious Dev and his ghost, as well as learn more about the mole at ACRO. OH SO GOOD!
I am really and truly enjoying this series so far. Both books I’ve read have it all: great story line, strong overall story arc, interesting and fulfilling characters and great sex!
Rating:

4 responses to “Unleashing the Storm”