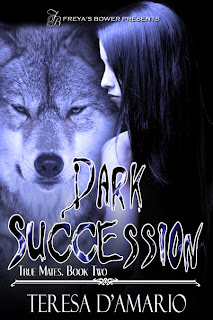 Nora Hunt is the daughter of former pack leader Sean Hunt and niece to Kieran Hunt. Emotionally and physically scarred after being held captive for weeks, she’s finally ready to move on with her life. But when she meets Ryland, she discovers not only a world of darkness and pain, but discovers Ryland may not be any better than those who held her captive all those weeks.
When Ryland Keegan steps in as Alpha of his dead brother’s pack, he inherits a pack of savage rogue wolven, as well as a legacy of violence, lies and five women held captive within the pack’s confines.
But when Ryland’s pack members start dying one at a time, he must decide if Nora is the catalyst or the killer. Can he trust his True Mate? Or will he be relegated to a life of leading the dregs of Wolven society?
What I’m talking about:
Dark Succession is an excellent mixture of action and romance, which alone made for a wonderful read. However, I was glued to the pages of this book because of the excellent story telling and an gripping “whodunit” plot line. Ryland’s pack members are being killed off and he has no idea who is doing it or why it is happening. In addition, someone keeps breaking into Ryland’s den, and he finds a mysterious coded diary that his dead brother left behind. Ryland doesn’t know who can help him, and after he has been lied to and hurt by his own family so often, he cannot even trust that his True Mate, Nora, is innocent. We are introduced to a wonderful cast of characters and I found myself constantly looking for a hint or clue that would help me solve the mysteries.  I could not put this book down.
On top the great whodunit story, we have Nora: our heroine. Nora is a shewolf and daughter of her pack’s former leader. She is strong, but was destroyed by her own capture and torture and is no longer the confident shewolf she once was. (We read about her captivity in the first book, She Wolf.)
What I love about Nora is that we watch her grow from the weak shell of her former self to the strong alpha-bitch she was born to be. For wolven to show fear is signing a death warrant. And Nora does that early on in the book when a not very nice wolven grabbed her wrists, forcing Nora back into her memories of her capture. We watch her learn to overcome the past, and with the patience and love of her Mate, she gains back her confidence.
On the flip side of Nora’s story is Ryland’s journey from lonely leader to powerful alpha with a heart. Early on he is drawn to Nora physically because of the True Mate bond. But, he is disgusted by Nora’s fear, yet knows he must accept it since she is his destined Mate. He gives her time to grow and is surprised at how deeply he learns to care for her. The author provides great character development as Ryland goes from desires fueled solely by the bond nature put in place – to realizing his own faults as he watches his mate grow.
The story is well written and a joy to read. The end of the book started to drag some, but mostly because I wanted to get some answers and was an impatient reader. I was a bit disappointed that I couldn’t figure out exactly who was behind all of the shannigans, but it was still a great mystery. One thing that did bother me was Nora’s constant self-berating of her body. Even after she is able to “see” herself through her lover’s eyes and heart, she still puts herself down. She is stronger than that, and it annoyed me.  But in the end, the story is a good one and I highly recommend.
My Rating: