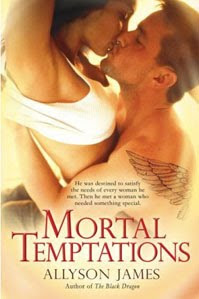 What I’m talking about:
The story involves two demi-gods from the Greek pantheon, one a “winged man” – Nico, the other a shifter – Andreas. They have spent millennia trapped in a wicked curse placed on them by Hera. The premise of the curse: when a women is attracted to one or the other, a bond forms and the gods must become the female’s sexual slave. The women will use the men up while the men fall in love with the females. Once the woman is tired of the gods, the curse will cause her to leave the male and forget him, while the gods wither in pain from a broken heart.  Not a bad idea to “get back” at ones who were careless with women’s hearts.
But of course, this time around, things are different… Nico and Andreas think that they have discovered a means to end the curse. And wouldn’t you know that along the way they meet Patricia and Rebecca… two women that may have been drawn to the gods because of the curse, but fall in love despite of it.
The story takes the group to London and Egypt on a search for answers. They meet other deities and duel with Hera’s demon fighters. The story is fairly fast paced and the plot not too bad.
I’ll admit that I picked up this book specifically looking for an “erotic” story. I have been enjoying paranormal romance books for well over a year now, and recently learned of the “erotic” sub-genre. I wondered… what would make a book erotic, and in this book’s case it is a lot of m/m/f and m/m sex. And as much of a fan of great smut that I am, I have to tell you, this book’s sex scenes didn’t do it for me. It wasn’t because of the erotic nature or multiple partners.  It was that they didn’t have heart in them. Romance novels revolve around “true love” or “happily ever afters” and the sex is usually a result of that core principle.  In this story, there was a lot of passionate-less sex that did not promote the love story of the book.  And this became tiresome quickly.
One annoying thing that I have to quickly mention… Are you familiar with the word quim?  Well, I had never heard the term, and it is used frequently in the book. It didn’t take long to figure out what it meant, but this word is obsure and dated… My Kindle didn’t even have it in it’s dictionary! It wasn’t found in the Merriam-Webster Online Dictionary! I found this definition at dictionary.com:
quim [kwim]  –nounSlang: Vulgar.  vagina; vulva.
Origin: 1725–35; orig. obscure
So now you know.
Overall a quick read. If you want some adventurous m/m/f sex, check it out. The plot is a fairly good one.
My Rating:

————-
And don’t forget… There is still time to enter my giveaway. Contest entry and rules HERE