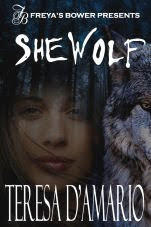 A small town veterinarian has a big time problem. She’s not human.

Plagued as a child with an extra-sensitive sense of smell, strength, and eyesight, Anna Callaway always thought she was special. But she didn’t understand how special until she met Kieran Hunter.

He insists they are True Mates, but he’s not human either. He’s wolven.

Kieran is a protector of his race. No longer the Alpha of his pack, he spends his time searching out and punishing any who may reveal their race to humans. While patrolling, he finds two wolven about to kidnap Anna. He battles to protect her, but is surprised to find himself drawn to her in a way he never expected.

The couple must learn to deal with their differences before they can address their similarities. But when three men kidnap Anna, she must decide if she is to embrace the wolven way of life, or return to her quiet existence. And whether to abandon the man who claims her as his True Mate.

What I’m talking about:
From the moment that Anna steps out of the nightclub and into the arms of two  werewolves (wolven) in the opening scene, I was hooked on She Wolf.  In fact the first chapter was one of the best opening sequences to a book I’ve read. It had the right mix of action, interest and emotion. The author perfectly details the scene by allowing the reader to experience the situation using Anna’s better-than-normal sense of smell and inner voice.
Anna is accosted by two rough males – she can sense that they are up to no good, but Anna is unaware of the danger she truly faces. Like most humans, she does not know about the existence of shifters, and when she sees one of her attackers start to “go wolf” she assumes it’s all trickery. Then she sees another stranger, but she is drawn to him. I love that when our hero, Kieran, shows up, Anna can sense his goodness. And the first time they touch (innocently!) sparks fly – literally. I’m a big sucker for the “one true mate” love stories and this is one of those stories.
Anna and Kieran quickly get to know each other. And although this is definitely an “alpha male” story, Anna holds her ground and does things on her terms. She is a strong individual that can handle any situation. In fact, when our alpha-boy goes weak and wimpy, it is Anna that fights for her man and then forces him to prove he’s worth the fight.
The story flowed nicely – moving from the open scene, to the “get to know you” to the “we have problems” and then “fight for each other” scenarios. There were a few plot points that left me slightly annoyed, but overall the story was much stronger than a few errors or confusion. The biggest issues I had came at the end of the story. I really felt that I could have used about 2-3 more chapters to play out some of the events that only took a few sentences to explain. I felt a bit cheated after such a fun, emotional ride to be told “this is what happened next.”
However, I am pleased that the second book of the series, Dark Succession, is already available for my reading pleasure, and I have been told by Ms. D’Amario that some of my questions will be answered.  I recommend this book – especially if you enjoy shifter and/or predestined mating stories. It is a highly enjoyable read.
My Rating:

3 responses to “She Wolf – Review”