Posted May 24, 2010 by Jen in 4.5 stars, Giveaway, Paranormal Romance, Rating A, Reviews Tags: contest, Gena Showalter, Lords of the Underworld

In celebration of Tuesday’s release, both Bells and I have our ARC-reviews of The Darkest Passion. You can read mine below and visit Hanging With Bells for her review. 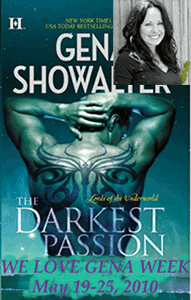 The Darkest Passion
Author: Gena Showalter
Release Date: May 25, 2010
Publisher: Harlequin Publishing
Lords of the Underworld Series Book #6
ISBN: #0373774559
NOTE: this is an ARC review that I obtained from NetGalley. I did not pay for the book, and I did not receive anything for this review.

For weeks, the immortal warrior Aeron has sensed an invisible female presence.  An angel–a demon-assassin–has been sent to kill him.  Or has she?  Olivia claims she fell from the heavens, giving up immortality because she couldn’t bear to harm him. But trusting – and falling for – Olivia will endanger them all. So how has this ‘mortal’ with the huge blue eyes already unleashed Aeron’s darkest passion?     Now, with an enemy hot on his trail and his faithful demon companion determined to remove Olivia from his life, Aeron is trapped between duty and consuming desire. Worse still, a new executioner has been sent to do the job Olivia wouldn’t…

Ah: Aeron… How I have waiting for you since the beginning!  I have been in love with anticipating Aeron’s book since the first Lords of the Underworld story. And my wait was rewarded with this wonderful story.
My tattooed, black-winged hunk, Aeron, has been tormented by his demon, Wrath, for centuries. Wrath gives Aeron the ability to “see” an individual’s history – all of his/her sins, and creates a need in Aeron to destroy the individual for these sins. Cronus, the god king and ruler over the Lords, placed a curse upon Aeron in the first Lords book, which put him through terrible bloodlust, and he almost went insane. Once the curse was lifted, Aeron was able to get himself back together and maintain some sanity with the calming influence of his “daughter” demon, Legion.  That is until he meets darling Olivia, a true angel. She soothes Aeron and causes Wrath to purr. She gave up her heavenly existence and climbed out of hell to be with Aeron. She is naive, but brave – willing to give up everything just for a little fun and *wink, wink*.
Ms. Showalter does a fantastic job weaving a tale of star-crossed love. Their love story is a beautiful centerpiece in this book. Olivia is confident in herself and in the One Divine Creator’s plans, which includes Aeron’s death. She will give anything to spend a few moments with Aeron. She knows that he is to die, and she seems to accept this until she spends time on Earth, begins to experience emotions, and learns what these human emotions do to an individual. When she realizes she truly loves this male, she understands that she must let him go for the greater good. Conversely, Aeron is happy with his life and does not want Olivia in it. Until likewise, he learns to become a whole individual through loving someone else. This makes for some heighten emotional points and the sacrifices they each make to be together are heart-warming (and I shed a few tears).
In addition, Gena gives us insight into Legion, a character that Aeron met in hell and adopted as his daughter. What Aeron doesn’t realize (and neither did I for a bit), is that Legion isn’t a little girl. She is all female with certain hopes and desires. I really enjoyed watching the transformation of Legion and her relationship with Aeron.
The overall story arc of Lords vs Hunters slows a bit in this story and was more of a side plot in this book, which I enjoyed.  We still learned a few things, but the Hunters took second fiddle to the development of the love between the two main characters.
My only complaint about this story is the ending – not the contents of the ending, but rather the abrupt finality to the tale. The entire ending was verbally spelled out by Olivia and “wham” the book was done. I would have much rather “seen” the ending play out. Give me a chapter that showed me what happened to all the players after the peak of the story. (It’s tough to explain without spoilers.)
I highly recommend this story to all LORD and Gena fans! It has the perfect mix of romance, action and humor. And if you have not read the Lords of the Underworld series – START NOW! but you really need to start with the first book, The Darkest Night to get the most out of this book.
My Rating:

——-
So now it’s time to talk about today’s giveaway! Gena has generously donated a signed copy of one of her books for each day of the celebration!!! Today’s giveaway is for the 4th book in the Lords of the Underworld series THE DARKEST WHISPER!

Here is what this great book is all about:
Bound by the demon of Doubt, Sabin unintentionally destroys even the most confident of lovers.     So the immortal warrior spends his time on the battlefield instead of the bedroom, victory his only concern until he meets Gwendolyn the Timid. One taste of the beautiful redhead, and he craves more.

Gwen, an immortal herself, always thought she’d fall for a kind human who wouldn’t rouse her darker side. But when Sabin frees her from prison, battling their enemies for the claim to Pandora’s box turns out to be nothing compared to the battle Sabin and Gwen will wage against love.

To win a signed copy of The Darkest Whisper this is what you need to do:

Don’t forget to check back tomorrow at BELLS’ blog to read a fan letter to Gena, and one last chance to win a signed book.

19 responses to “WE LOVE GENA WEEK – Day #5: Review of The Darkest Passion”