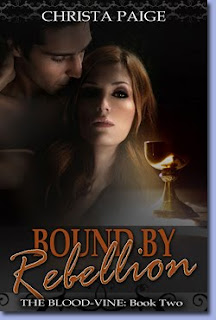 Katiya and Lucas are blood-bound mates. Nearly a decade ago, their idyllic relationship quickly devolved into one of animosity. Furious with Luke’s meddling in her privacy, she left him. Except, they have a pesky issue that continues to bind them together. They must carry on, sharing their blood, or face the deadly consequences, literally.
Ten years have past since Kat moved out. Now, their estrangement firmly in place, she is desperate to move on with her life. So desperate in fact, that she will even rebel against the long-held convictions of her people. Secretly, over the past several months, she has formed an infatuation with a co-worker and, tonight, she plans to take it to the next level.
Luke is unhappy with their tenuous situation. He is prepared to do anything to win her back. He wants her in his arms where he can show her the depths of his passion. If seduction is the key to their reconciliation, he is more than ready to take her to new levels of pleasure. He needs her home, with him, to keep her safe and secure.
Once Kat takes a drastic step to alter her life, she comes face-to-face with a sinister threat. Lucas must find her in time and, when he does, he promises, on his life, that nothing will keep them apart ever again.
What I’m talking about:
When we first meet Kat and Luke, we discover that they are separated and Kat is ready to move on. In the beginning, we find out that Kat must maintain a “relationship” with her estranged mate so that he can survive (needs her blood) and she can stay young.  She convinces herself (and me) that it is an awful arrangement. But as I read on, I realized that Kat was also a spoiled brat.
In comes Daniel: handsome co-worker and Kat’s prospective romance. She hasn’t been out with anyone since Luke and is finally ready to take that chance. Immediately we know that something isn’t quite right with Daniel, and I enjoyed trying to figure out what it was (and how Luke would figure it out).
The first thing I noticed about Ms. Paige’s work was the exquisite detail she pours into her story. From beginning to end, each scene was thoroughly described, but not over done. Here is an example:
Sprawled out on a butter-soft, overstuffed, dark leather couch, he flipped on his bigscreen plasma TV. The fifty-two inch monstrosity hung on the wall directly across from the L-shaped sofa. Underneath the television, a black lacquered entertainment center held speakers, game consoles and a vast selection of DVDs.
I loved that I was able to visualize the surroundings, and this enhanced my reading immensely.
I was also impressed with the character development in Bound by Rebellion. Usually, I am frustrated by the expedience with which a character changes in shorter books (novella-length); however, Ms. Paige has written full and interesting characters that grabbed my attention and left me satisfied.
The romance between Kat and Luke is hot and sexy! We get “just the two of them” for roughly the last third of the story and the time is largely well spent. There is an emotional shower scene that left me a bit misty-eyed, but also feeling a tad over-heated *wink*. My biggest complaint was that while reading from Luke’s POV, we are constantly reminded that he was “holding back his need” for Kat. It became redundant and put a damper on some of the sexiness.
There were a few other personality issues I had with Kat – or more concerns about how “easily” she seemed to forget and move on (I can’t give details without putting in spoilers). At times, I felt the 180-turn in her feelings for Luke from the beginning of the story were too radical. However, in the end, almost all of my issues were addressed, which made me a happy girl.
The novella leaves an open door for more stories to come (Luke has some handsome brothers waiting in the wings), and I will for one will be reading any subsequent books. This was an enjoyable, sexy read with the right mix of action and romance.
My Rating:

3 responses to “Bound By Rebellion – Review”