Siren’s Call
Author: Devyn Quinn
Release Date: August 3, 2010
Publisher: Signet Eclipse
Dark Tide Series Book #1
ISBN: #
Genre: Paranormal Romance/Adventure
NOTE: An electronic copy of this book was given to me by the author for the purposes of review.
From the author’s website: 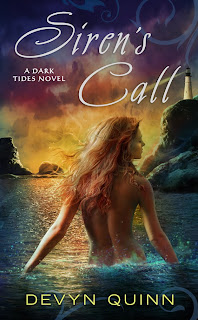 Between desire and love there are some things that can’t stay buried, even in the deep of the ocean.
As a woman with a secret, lighthouse keeper Tessa Lonike savors her solitude on the island of Little Mer, off the coast of Maine. During a violent storm, Tessa spots a man thrashing in the ice cold waters and dives in to save him, using her ability as a mermaid to easily pull him to shore.
When Kenneth Randall awakens on the beach he is alone, left with the haunting memory of his beautiful, flame-haired savior. But a year later, when Kenneth meets her again, he’s determined not to let Tessa slip away. Just as the desire between them begins to burn, Tessa’s archaeologist ex-lover comes back to town with a tantalizing clue to her murky heritage.
The trio travel to the Mediterranean in search of answers, and when Tessa inadvertently opens an underwater portal they find a lost mermaid city. But in the deep, not everything is as it seems, and Tessa must decide if she wants to take her place as the royal heir, or follow the call of her heart…
What I’m talking about:
Siren’s Call starts out with Kenneth, a lonely man at his lowest point. We get a quick idea of his turmoil in the prologue, and then jump forward to “present day” in the first chapter. Now we have a man who is ready to live again and wants to thank the mysterious woman that saved him all those months ago.  Kenneth searches out Tessa, and decides to stick around after meeting her. He is immediately attracted to her, subconsciously knowing there is more to her rescue than she is telling.  What I love about this story is that the secrets are shared right away. The first night Kenneth is on the island, he discovers that Tessa is a mermaid. And they don’t tiptoe around this or their individual pasts. They open up and they act on their mutual attraction. This is a refreshing change from books where secrets are held until the last chapter of the story. Their attraction is hot and their banter is real.
The story quickly moves from their budding romance to the heart of this book: a mermaid adventure. Next enters Tessa’s a**hole ex, Jake, who has proof of the lost mermaid civilization. This guy has a bad history with Tessa and her sisters, yet they open up to him almost immediately. It bothered me how willing the sisters were in sharing their collective mer knowledge, but I guess they were excited to find out about their past.
It’s here that the story changes from what I would call a romance book to an adventure book. The focus moved away from Kenneth and Tessa. There are no sparks in the couple of sex scenes and in fact, we don’t get much on their relationship at all. Instead we move into adventure mode as Kenneth, Tessa and Jake travel to the Mediterranean Sea in search of the ancient mermaid civilization.  The mermaid mythology is laid out in detail for the reader – which makes sense since this is the first novel in a new series.
The adventure continues as the trio find more than they ever hoped, we see Jake’s true colors, Kenneth and Tessa get into a few near-death situations and realize that they love each other. (Well, Kenneth was always there – it’s Tessa that finally wakes up and smells the seaweed!)
I enjoyed the story, and the new mermaid mythology is interesting. The book left us with a pretty big opening for upcoming stories. The biggest disappointment for me was the lack of emotional bonding (and sex) between Kenneth and Tessa throughout the story. The story of their relationship was put on hold for a bulk of the book, and when we finally get back to them, I don’t have as much of a vested interest in seeing them work it out. In a particular well-written scene when Kenneth was about to die, my heart got a little achy for him and his sacrifice.  But I would have felt much more if I had had a chance to watch their love grow throughout the book.
In the end, Kenneth and Tessa do find each other and their HEA – and the story ends as a true romance novel should. I look forward to reading the follow up book, Siren’s Surrender, due out February 2011, to see where this unique mer-mythology takes us!
My Rating: