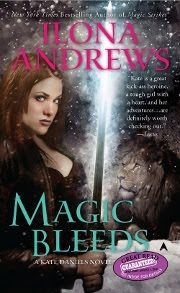 Atlanta would be a nice place to live, if it weren’t for the magic. When the magic is up, rogue mages cast their spells and monsters appear, while guns refuse to fire and cars fail to start. But then technology returns, and the magic recedes as unpredictably as it rose.
Kate Daniels works for the Order of the Knights of Merciful Aid, officially as a liaison with the mercenary guild. Unofficially, she cleans up the paranormal problems no one else wants to handle—especially if they involve Atlanta’s shapeshifting community.
When she’s called in to investigate a fight at the Steel Horse, a bar midway between the territories of the shapeshifters and the necromancers, Kate quickly discovers there’s a new player in town. One who’s been around for thousands of years—and rode to war at the side of Kate’s father.
This foe may be too much even for Kate and Curran, the Lord of the Beasts, to handle. Because this time, Kate will be taking on family…

This is one of those books that as soon as you’re finished reading you want to go back and re-read it all over again — you are sad that the experience is over and just want to make it last and last — ESPECIALLY for those that have followed the Kate Daniels series from the first book. Once again, the husband and wife team that is Ilona Andrews does a remarkable job weaving a tale of magic, love, action and mystery.
This book picks up shortly after Book 3: Magic Strikes and the novella (Book 3.5), “Magic Mourns,” end. We quickly find out how bet/date between Beast Lord Curran and Kate goes. But this story is much more than the budding romance and love between these two powerful people. There is a new baddy in town. One that can spread disease with a touch and infect even the Shifters. He also appears to be able to control a group of undead mages. Not a fun day for Kate or Atlanta.
I don’t want to give ANYTHING away, so I’ll make my comment generic and brief. But know this: Magic Bleeds is the best Kate book yet! Kate really makes her mark. She figures out who she is and where she wants to be. She faces her parentage issue and gets past the fear. She accepts her faults and stands up for what she knows is true. Kate has always been a kick-ass woman, but she grows beyond the exterior toughness and internal turmoil we’ve seen for three books. She blossoms into one of the best heroines of a series, ever. Kate is someone I want want to be when I grow up! (and it has little to do with that hottie Beast Lord, really, I swear!)
Once again, the story is filled with powerful action, intense emotions and spot on humor. You can read this as a stand alone book, however, I don’t recommend it. Kate’s internal battles over her parentage, her feelings for Curran, and struggles with magic just won’t be as meaningful without reading the prior books. And each one is worth the read. I don’t read a lot of Urban Fantasy, but this series just blows me away. The story lines are unique, crisp and emotionally satisfying. The entire series is a must read!

I’m actually going to give this book two ratings. I really struggled with this. The overall rank of this book, outside of the phenomenal series is:

HOWEVER, the book, within the context of the entire series deserves:

Either way you look at it… it’s a must read!


and this is one of