Posted June 9, 2010 by Jen in 3 stars, Paranormal YA, Rating B, Reviews, YA Literature Tags: Amanda Hocking

My Blood Approves
Author: Amanda Hocking
Release Date: currently available
Publisher: lulu.com
also available in Kindle format from Amazon
My Blood Approves Series Book #1
ISBN: #0557364639
Genre: Paranormal Young Adult
NOTE: An e-copy of this book was given to me by the author for review purposes.
From the author’s website:
Seventeen-year-old Alice Bonham’s life feels out of control after she meets Jack. With his fondness for pink Chuck Taylors and New Wave hits aside, Jack’s unlike anyone she’s ever met. 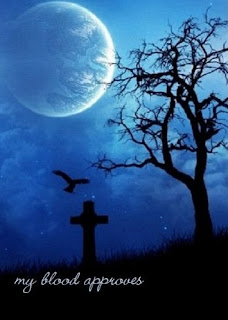 Then she meets his brother, Peter. His eyes pierce through her, and she can barely breathe when he’s around. Even though he can’t stand the sight of her, she’s drawn to him.
But falling for two very different guys isn’t even the worst of her problems. Jack and Peter are vampires, and Alice finds herself caught between love and her own blood…
What I’m talking about:
Alice is your average high school Junior, with a best friend that likes to party and a younger brother who is more of a parent than her mom.  She likes to hang out, sleep all day, text her friends, etc. Then she meets Jack. He’s cool and different, and Alice likes to spend time with Jack. He takes care of her, but leaves Alice in a world of confusion when he refuses to explain the “strange” things that she notices about him and his family.
We spend the first half of the book reading how Jack and Alice become friends and learn to trust one another. But I just don’t know WHY Alice would ever trust Jack. He never once answers her questions – always avoiding the truth. Yet over and over she says she trusts him and wants to be with him and his family. I didn’t buy it. And, I have to say, I spent the first half of the book comparing Jack and his family to another famous literary vampire family: The Cullens. Jack and his family are unbelievable gorgeous, his family is wealthy and he has a fondness for driving fast in fancy cars. He even saves Alice from a car wreck. Mae was the perfect “mom” figure and doted on Alice. I have to say that there were so many similarities, I found it a bit distracting.
However, the story changed pace for me about halfway through the book. Once Alice FINALLY figures out the truth and the family opens up to her, I became engrossed. I wondered what the secrets were and wanted her to figure them out. The pace of the story picked up and the writing captured me. Also exciting was the interesting love triangle that Ms. Hocking is developing between Jack, Alice and Jack’s brother, Peter. The mythology of this vampire world says that Alice and Peter are “soul mates,” yet when she isn’t in Peter’s thrall, she has true feelings for Jack. The family is baffled about the situation, and I find it exciting. Alice and Jack share a moment – a kiss – that just blew me away and left me wishing it didn’t end.
The story ends rather abruptly and I am left wanting more. I look forward to finding out what happens next in Alice’s world… (The second and third books of this series – Fate, Flutter – are currently available.) This is an enjoyable, easy read, especially after the storyline develops and the character development intensifies. It looks like Ms. Hocking may have a hit series on the horizon!
My Rating:

5 responses to “My Blood Approves – review”