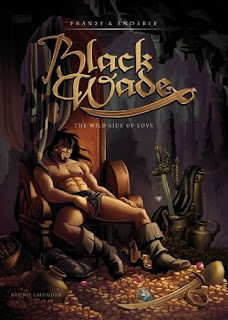 The rough and merciless pirate Black Wade and his band are the scare of the seven seas. And just like his greed for gold is insatiable, his sexual craving knows no boundaries as well: When they board a British ship, Wade takes Lieutenant Jack Wilkins as a prisoner to satisfy his lust. At first Wilkins struggles with all his might, but soon he has to acknowledge that he actually has pleasure in the eager sexual encounters with the handsome pirate. In the meantime his fiancée Annabeth is waiting wistfully for the return of Jack, not knowing if he’s still alive. And on the pirate ship emotions are running high as well: Buccaneer Marak keeps a jealous watch over the prisoner Jack. He would love to polish Wade’s gun barrel himself. Due to the rising nervousness Wade realizes that he cannot allow himself the tender feelings he begins to have for Jack. To prove how merciless he is, he maroons Jack on a raft and relinquishes him to the forces of the wide ocean. But that’s nowhere near the end of the story…
What I’m talking about:
Okay, so let’s get this out of the way right up front… I liken reading Black Wade to guys who say “I read Playboy for the articles.” While those articles may be thought-provoking and interesting, we all know it wasn’t the driving reason for buying the magazine.
The key to reading a graphic novel is that you need to read both the written words as well as the detailed pictures that go with each panel/scene. Because there are so few words, reading them alone will not give you the entire story. Black Wade is no exception to this rule. There are several key plot points and underlying facts that can only be discovered from the artwork. For example, in the very beginning of the story Lieutenant Jack Wilkins lays down for a rest on his voyage home and fantasizes about his fiancee. But what we see is that fantasy turn from Annabeth into a rather large phallic, and only then does Jack find his release. It’s a key part of the developing story, told to the reader via images.
And let me tell you about the images in the book. They are incredible. I read a few comics, but none have the artistry of Black Wade. The details are amazing, colorful, and as I said earlier, tell a story on its own. But be warned: this is a VERY graphic novel! (And the pun is not a joke.) If you are at all uncomfortable with male/male sex – then do not get this book. You have been warned. However, if you enjoy intense m/m sex – or are curious – this is a wonderful story to read.
While Black Wade’s love story is simple in nature, it is pleasing in every way. I do not condone forced sex as the start of a relationship (Wade captures Jack and makes him a “love slave”), but it works in this pirate tale. Jack may be saying “no,” but the pictures tell the whole story.  You start to realize that maybe the “no” is not one that means stop, but one that means “I am not ready to face the fact that I am a homosexual and am enjoying this sex.” Once again, you need to “read” the artwork to understand the emotional connection that develops between Jack and Wade. It’s amazingly sweet and completely satisfying. There are a few tough parts to get through (a horrible rape scene of Wade), and the story had a few open-ended sub-plots (what’s with Marak?). I was sad to see the story end so quickly and I can only hope that there will be a second story in this wild tale.
My Rating:

4 responses to “Review of Black Wade: The Wild Side of Love”