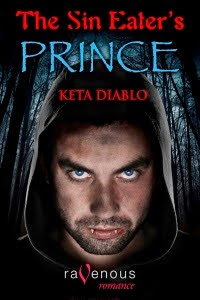 Owen Rhys, the sin eater of his village in Wales, has been shunned by the local villagers his entire life—except by Andras Maddock, the local physician. In love with the one man he thinks will never return that love, Owen is shocked when Andras saves him from death at the hands of a vampire and admits he cares deeply for Owen.
Dagan, son of Traherne, the vampire Andras killed to save Owen, will stop at nothing to avenge his father’s death and obtain the Prince of Wales’s mystic sword from Andras. The divine claymore holds the power to grant immunity from the sun’s harsh rays—the one exemption the dark Lords of the Underworld has sought for centuries.
Star-crossed love, sorcery, and bloodlust collide on a vengeful path where only one side can remain.
What I’m talking about:
Owen is one of those perfect males… a quiet, humble man… one that is gorgeous, but doesn’t know it, one that gives of himself day after day and expects nothing in return. From the beginning I fell for Owen. I was so worried he would get his heart stomped upon or end up being used and tossed away.  But someone else noticed how amazing Owen is… Andras, small town physician and vampire-in-hiding. The two admire each other from afar, never expecting their lust and desire to be returned. Yet fate brings them together and leads them on a wonderful journey.
Their love story is uncomplicated and full of life. They don’t play games with one another and act on their desires almost immediately in the book (although it has been about 5 years of backstory for the two of them.) Their union does not disappoint. Their love making is HOT and full of beautiful emotions that pulled on my heart strings. There is detailed m/m erotic sex, so if you are at all leery of m/m romance, you may want to steer clear. However, I found the romance so beautiful, it didn’t matter to me what their sexual preferences were.
But, this story does not end with the union of Owen and Andras. Enter Dagan, long tooth (vampire) and bad guy extraordinaire. His father was slain by Andras and now Dagan wants revenge – as well as the magical sword which Andras holds. In order to defeat Andras, Dagan discovers the physician’s weakness: Owen. Dagan uses Owen in his attempts to bring down Andras. Yet Dagan is also drawn to beautiful Owen, and I wondered: is there more to this simple man than meets the eye?
The Sin Eater’s Prince takes place in old-Wales and the mythology is slightly different that the “typical” vampire romance. The vamps are not the good guys and there is no hot and heavy blood-sucking fantasies. Andras must fight his dark side continuously. Ms. Diablo incorporates various Welsh tales and traditions, which gives it a darker undertone and that “old world” vibe.
In addition, we meet a handful of supporting characters that fill out the story. I enjoyed kind-hearted Carys, and hope that we may see a future where she finds a lovely man to warm her heart.
The only downside to this tale was the ease at which Dagan and his clan was brought down. There was a lot of build-up and it seemed a bit too easy or too quick for my taste. In addition, I was left wondering about the mysterious werewolves, the evil dragon lord, Draig, and a few other things.
Those unanswered questions coupled with the open-ended, vision-of-the-future epilogue, have my interest piqued for a second book. With Owen was just learning of his true nature and potential, I sure hope Ms. Diablo follows up on this delightful tale. The Sin Eater’s Prince is an enjoyable read that I definitely recommend.
My Rating:

3 responses to “Review of The Sin Eater’s Prince”