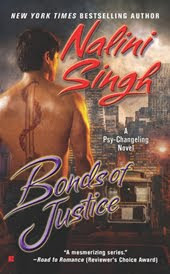 Max Shannon is a good cop, one of the best in New York Enforcement. Born with a natural shield that protects him against Psy mental invasions, he knows he has little chance of advancement within the Psy-dominated power structure. The last case he expects to be assigned is that of a murderer targeting a Psy Councilor’s closest advisors. And the last woman he expects to compel him in the most sensual of ways is a Psy on the verge of a catastrophic mental fracture…

Sophia Russo is a Justice-Psy, cursed with the ability to retrieve memories from men and women so twisted even veteran cops keep their distance. Appointed as Max’s liaison with the Psy, she finds herself fascinated by this human, her frozen heart threatening to thaw with forbidden emotion. But, her mind filled with other people’s nightmares, other people’s evil, she’s standing on the border between sanity and a silken darkness that urges her to take justice into her own hands, to become judge, jury…and executioner…

In Ms. Singh’s 8th novel-length installment of the wonderful Psy/Changeling series, we have hero, Max, a hard-edged cop, who we met in Book 4: Mine to Possess. When the story starts, Max is working on a brutal case of a serial killer sociopath, with the assistance of J-Psy, Sophia Russo. The two feel a mutual attraction and both decide to act on these feelings when they are thrown together while working on a special investigation for Psy Council member, Nikita Duncan. Sophia is willing to risk “break Silence” to be with Max because she is scheduled for complete rehabilitation (read: brain wipe and complete loss of memories, personality) within the immediate future.
The story lines of the serial killer and the investigation into the attempts on Nikita’s life criss-crossed throughout the story and both were used to forward the overall story arc in the series. The information we learned about the PsyNet and Psy Council was exciting and set the series up for the final two (upcoming) books in the story arc. Learning who was behind the attempts on Nikita’s life and where allegiances lie within the Council was what kept me reading this story.  The book shined brightest when dealing with Nikita’s estranged daughter, Sascha, and the interactions between the two were well-written and very telling of the depth Silence reaches in Nikita’s heart and mind.
While the overall story progression was interesting, I found the romance between Max and Sophia lack-luster. I don’t know if it is because they had to develop their physical relationship very slowly (due to Sophia’s weakened mental shields and the nature of her work as a J-Psy), but I don’t think that was it. This was the 5th story in which we have a Psy heroine and a strong alpha male and the second consecutive story with a Psy-Human coupling. First: I miss the Changelings. They are the heart and soul of this series and their emotional component was sorely missed. As the story progressed, Changelings were involved in the sidelines, but we got very little looks into their emotional connections with others. Second: I found myself thinking “been there, done that” with the whole Psy female thing (“broken” in some way, unaccustomed to touch, cannot experience emotions without risk of exposure in the PsyNet). While Sophia’s story and adaptation to the conditions were unique to her situation, I still felt a bit bored with the character.
All-in-all, I enjoyed the book, but it was slow reading at times. A reader that is not as deeply involved in the entire series as I am may not experiences the “issues” I had with the story. I anxiously await the next book, Play of Passion (Nov. 2010), which involves the pairing of two Snow Dancer Wolves. Woof.
Note: While it is not one hundred percent necessary to have read the 7 books in the series prior to this one, first time readers may not understand all of the complexities and intricacies involved in this amazing world. This series is one of my top 5 favorites and one of the primary reasons is Ms. Singh’s ability to develop a well-integrated over-all story arc from story to story. I highly recommend starting with Book 1: Slave to Sensation and enjoy this whole series!

6 responses to “Bonds of Justice – Review”