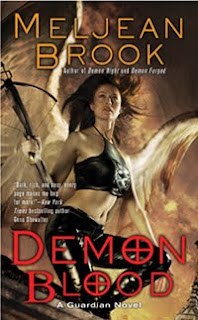 Long before she was transformed into a Guardian and trained to fight demons, Rosalia knew darkness all too well. Raised by a demon, Rosalia learned to guard her heart—and her soul—until she found a man worthy of her love. Once, she thought that man would be the powerful vampire, Deacon…until he betrayed the Guardians.
After losing everything to the lies of a demon, Deacon lives only for revenge—and is taken aback when Rosalia offers to help. A vampire who has nothing—who is nothing—isn’t worthy of her attention. But Rosalia wants to do more than just look, and the explosive need between them can’t be held in check. And when Deacon’s vengeful quest creates a dangerous alliance of their enemies, she will be his only hope…

I’m going to state up front that I LOVE the Guardian series. The mythology is interesting and unique, the story lines are exciting, the romance is sizzling, and Meljean does such an amazing job with character development that I am sad to say good-bye when I finish reading each story.  Demon Blood is no exception to this.
Picking up where Demon Forged ended, we find Guardian Rosalia recovered from her “abduction” and back in her own territory fighting demons. She runs into vampire (and traitor) Deacon once night, 6 months after she saved his life.  She begins to formulate a detailed plan that will get rid of several mutual enemies and begins to convince Deacon he needs to join her.
Immediately I was drawn to this couple. They each have a longing and ache to be with one another, but their individual and mutual pasts block the way. Their story is heartbreaking and I was routing for them to get together right away. And when I finally thought it was going to happen, my heart was ripped out. [MILD SPOILER] In an intense scene that emotionally crushes both characters, Deacon assumes that Rosalia will allow him to sexually use her just to get him to help her with her plans. Oh, the drama! I was in tears for both characters.
But as much as I was cheering for Rosie and Deacon, I became a bit annoyed with their constant “misunderstandings” and his assumption that she would only use him, never love him. When Rosalia hints about her mutual past with Deacon, he immediately assumes she means some other man, even though the story matches his own life.  I was relieved when FINALLY Rosalia walked away and said “no more.” (Relieved because it was action, but it broke my heart.) In the end, they do get their HEA (happily ever after), but it was a long road to travel. Even the ending that brings them together included yet another misunderstanding and more assumptions. That did taint their story a bit for me.  However, their romance was smokin’, and Meljean continues to write some of the hottest smex scenes around.
I enjoyed the side stories as well – mostly seeing a Guardian as a parent. The story dealt with some bigger “life” issues that have not been discussed from a Guardian point-of-view before. The scenes between future daughter-in-law, Gemma, son, Vin, and Rosalia were excellent.  I also enjoyed the progression of the overall story line with the nephil and demons. I missed seeing most of my favorite characters (including the lovely Savi and Colin), but I loved the focus on new Guardian, Taylor. I cannot wait to see where Meljean takes the story next.
My Rating: