Today I have a special guest here at That’s What I’m Talking About: My dear friend “Westie,” the West Coast Beach Wife from the site Beach Wives’ Diaries. She’s sharing with us her review of Original Sin by Allison Brennan. Take it away Westie…

“Haunted by chilling memories of demonic possession and murder, Moira O’Donnell has spent seven years hunting down her mother, Fiona, whose command of black magic has granted her unprecedented control of the underworld. Now Moira’s global search has led her to a small California town that’s about to become hell on earth.”
Hello all and welcome to Westie’s Rear View Review of Original Sin, by Allison Brennan. The book is the first in a magical thriller series about the Seven Deadly Sins being unleashed upon the Earth.  Before I dive on in, I thought I would tell you a little bit about my brushes with feedback and why I bought the book.  So, grab a fruity drink and pull up a chaise lounge and enjoy!

When I was very young, my dance training involved four-foot tall Russian ballerinas who were bitter about being displaced in a new country. Teachers would scowl and shout incomprehensible things in Russian at me on a daily basis.  Encouraging words, hope and smiles made weaklings. If one couldn’t take criticism, then one was a weakling crybaby in the Ukraine.  Yes, Madame Ufail AtLifeakov made an indelible impression on me, but somehow it made me stronger.
Book Buying Scenario: I was in Las Vegas, hopped up on decongestants and martinis at 3:00AM.  Desperately needing poolside smut, I scoured a drugstore bookshelf for anything more romantic than Sudoku.  (- Don’t get me wrong, mathy people can be hot!!)
Why the Book Appealed to Me: First, Oooooohhh… Shiny. Metallic. Cover. (Damn those marketers!!) Second, it had the label “Paranormal Romance” on the back cover. Sold!
What Does Westie Think: First, cheeky chapeaux’s off to Allison Brennan.  Original Sin was far better than anything I could have expected at 3:00AM in Vegas!
Moira was a strong, sensual female lead. She fought her inner temptations, in a very human way, to stay on course and do the right thing.  I would trust Moira to lead gaggles of pre-teen Girl Scouts through Venice Beach.  No matter the distraction Moira fights and pulls through, even when facing the end of the world.  She is no chicken little!
The use of magical elements and descriptions of unearthly events was quite exciting for me.  Allison Brennan churned up some wicked cool special effects.  It reminded me a teeny bit of Buffy, and that show was my BFF for years!  Plus, I was able to identify most of the 7 deadly sins in action, even though the main focus was about greed. I liked the diversity.
The “good vs. evil” moral theme was something I could relate to in Sin City.  Have you ever had one of those nights where every tattoo parlor and piercing shop looks like a playground filled with candy?  After five of those nights, I definitely needed that moral theme!
While reading the middle section of the book, I was still poolside in Vegas during Spring Break.  Plot-wise, the book just seemed to stall out a little.  I felt like it was going in circles.  Maybe it was just my brain.  My husband politely pointed out that hot guys were seriously checking me out. There are giraffes that would look much hotter in bikini compared to me.  Think about it.  Giraffes have slender legs that go on for days, va-va-voom chests, and seductively long eyelashes.
So, yes, my head was spinning from extra testosterone and a strawberry daiquiri or three.
As for the paranormal romance label part, I was a bit confused.  The first signs of steamy goodness, by my standards, started near page 246, and it involved a chubby of sorts.  For me, that’s a looooong time to hold out!  (I had several long discussions with several people about post-kiss chubbiness. Ew!!)  All I can say is that poor guy could have used a Viagra pill for that moment, but made up for it later.  He really delivered a steamy and deeply satisfying pizza.  So, kudos for the fast recovery!
Again, I liked the whole concept of the book and just about all of the writing.  There were two or three sticky points for me, but I still enjoyed Original Sin, enough for me to immediately pre-order the next book!  Book 2 is Carnal Sin, and the cover is hotter than a lifeguard in August.  Cheers! 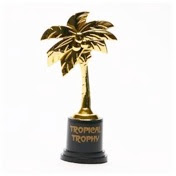 (Westie is not a professional book reviewer, just a friend donating her 2-cents.)
For “Judeo-Christian Magical Thriller,” I give it an amazing 4.5 tropical trophies.
For “Paranormal Romance,” I give it 2.0 tropical trophies.  (Maybe book 2 is more paranormal and more romance.  Maybe book 1 just was labeled wrong.  Maybe I’m just dismayed about my martini hand being empty!)