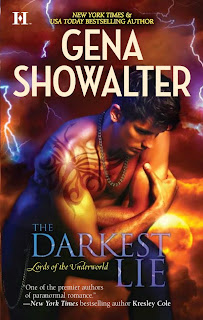 Forced to his knees in agony whenever he speaks the truth, Gideon can recognize any lie—until he captures Scarlet, a demon-possessed immortal who claims to be his long-lost wife.  He doesn’t remember the beautiful female, much less wedding — or bedding — her.  But he wants to . . . almost as much as he wants her.     But Scarlet is keeper of Nightmares, too dangerous to roam free, and a future with her means risking everything.  Especially as Gideon’s enemies draw closer . . . and the truth threatens to destroy all he’s come to love . . .

We were introduced to Scarlet in the last Lords of the Underworld story, The Darkest Passion, and my interest was piqued… a Lord that was once married and happy? I didn’t think that was possible knowing their tortured pasts and battles with their inner demons. But enter captive demi-goddess Scarlet who claims that Gideon, keeper of Lies, was once her husband – yet he doesn’t recall a thing. However, he knows he must have a connection with Scarlet based on their matching tattoos and the dreams he has had about her.
The story unfolds as Gideon tries to soften Scarlet so she’ll tell him about their shared past. She is reluctant to tell him anything because she is hurt and heart-broken from all of the years he has abandoned her. Yet as they play games back and forth, they grow to trust and love one another.
I have to say that I was a bit disappointed with the story of Gideon and Scarlet. To me, Scarlet wasn’t the strong warrior woman that our Lords have come to love and respect. She was wishy-washy and I felt she didn’t hold her own in the story. In the beginning she didn’t want to get her heart broken by Gideon again. She refused to tell him anything about their past even when he clearly didn’t recall a thing. By the end of the story she didn’t want to be with Gideon because she was afraid she’d be the cause of harm to him (via her aunt and/or mom). She was looking for any excuse not to be with Gideon and she comes across weak and not confident. Even in the climax of the story, when once again she’s being hesitant with her feelings, all Gideon has to use is 2-3 lines of reverse psychology and she’s changed her mind again. I just couldn’t connect emotionally with the couple and was frustrated with Scarlet’s character.
HOWEVER, Gideon and Scarlet were not the whole book and HOLY MOLY to all those other parts!  This book sets the stage for future story lines and takes our Lords in some exciting directions. We learn some VERY INTERESTING news about the lovely William that I cannot wait for Gena to explore. We get a glimpse at the upcoming story lines for Amun (Secrets) and Strider (Defeat) – both were left wide open and I am anxious to find out what will happen next. We also get a glimpse of Paris’s “girl,” Sienna, and her current condition. One other interesting side story looked at the inner workings of godly politics. These “other” parts of the book were well written and made the entire book better.
This book was a good read, and a must for all Lord fans. It was not my favorite book in the series, but was enjoyable and fun.
My Rating:

—
And don’t forget to enter my 200 Follower Giveaway!! Click the button below for rules and entry:

5 responses to “Review of The Darkest Lie”