Captive Spirit
Author: Liz Fichera
Release Date: June 28, 2010
Publisher: Carina Press
ISBN: #9781426890390
Genre: Historical Romance
Note: I won this book from the author in an online giveaway. The author asked if I would review the book. 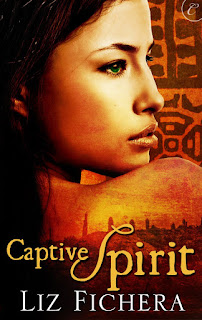 Be sure to check the bottom of this post for CONTEST information.
From the author’s website:
Sonoran Desert. Dawn of the sixteenth century.
Aiyana isn’t like the other girls of the White Ant Clan. Instead of keeping house, she longs to compete on the Ball Court with her best friend Honovi and the other boys. Instead of marriage, she daydreams of traveling beyond the mountains that surround her small village. Only Honovi knows and shares her forbidden wish, though Aiyana doesn’t realize her friend has a secret wish of his own…
When Aiyana’s father arranges her marriage to a man she hardly knows, she takes the advice of a tribal elder: Run! In fleeing, she falls into the hands of Spanish raiders and finds herself being taken over the mountains against her will. Now Aiyana’s on a quest to return to the very place she once dreamed of escaping. And she’ll do whatever it takes to survive and find her way back to the people she loves.
What I’m talking about:
I’m going to start by telling you that this is NOT the typical book that I read and review. First – It’s historical… taking place in the early 1500’s and focusing on Native American life. Second – there is paranormal activity in this story. There are no vampires, faeries, shifters nor any paranormal studs involved, and I LIKED IT!  It is a wonderful love story and *SHOCK* I didn’t miss the smut! I have officially expanded my horizons!
The story is told in first person narrative from the point of view of 16-year old Aiyana. She feels trapped by her daily life and dreams of going beyond the safe territory of her clan’s land. But when she is kidnapped by Spanish raiders, she realizes that her heart belongs back at home and with her best friend, Honovi.  She is driven to do what it takes to make it back.
This story outlines the intricacies of daily life and ceremonies for a Native American clan in a way that brought to life for me this early civilization. The details are beautiful and I felt like I was right along side of Aiyana as she struggled to keep up with her domestic duties, hunted deer, and struggled against her Spanish and then Apache captors. I was able to feel the anguish of Aiyana as she was dealt one blow after another in her quest to return home and keep dear Honovi safe. It made the moment of their eventual union so satisfying, it brought a tear to my eye. The innocence of a pure, unfettered love was amazingly sweet and romantic.
The action in this tale was intense and had my heart racing at times. I really wasn’t sure if Aiyana and Honovi would make it and that had me glued to the pages of the book. Aiyana faces and overcomes several challenges including capture and being taken far from home, two marriage arrangements to over-barring males (to whom she is a possession), starvation, basket weaving (it’s more intense than you think), and near rape. She is a strong girl and this tale takes us on her journey into womanhood. This self-discovery leads to the realization that sometimes home is the best place of all.
The only thing that (slightly) irritated me in this book was the way the eventual escape from the Apache warriors went down.  Aiyana and Honovi keep fumbling and things became hopeless until a true miracle occurred.  It wasn’t a bad way to get out of the situation, but I felt a little cheated – you know, make it impossible and then *BAM* all is fixed. It didn’t detract from the story, but I was a little frustrated. Yet that went away quickly as the pair journeyed homeward. The ending was left open and I look forward to the next tale of Aiyana and Honovi.
My Rating:

Now for the GIVEAWAY:
Readers… Liz is generously offering a digital copy of her book, Captive Spirit.  Please leave a question for Liz or a meaningful comment on yesterday’s interview OR today’s review of Captive Spirit.  One winner will be chosen randomly from those that comment.  Comments must be posted by August 10, 2010, 11:59 PM EDT. Winner will be announced on August 11, 2010.