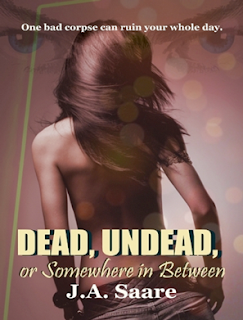 One bad corpse can ruin your whole day. No one knows that better than Rhiannon Murphy. She’s left behind the flash and sass of Miami for the no-nonsense groove of New York City, eager for a clean slate and a fresh start. A bartender by trade, a loud mouth by choice, and a necromancer by chance; she’s managed to keep her nifty talent hidden from those around her – until now.
The deliciously good-looking vampire Disco knows her secret, and when he strolls into her bar to solicit help investigating the mysterious disappearances of his kind from the city, she discovers he’s not the kind of person that appreciates the significance of the word no.
But in a world where vampires peddle their blood as the latest and greatest drug of choice, it’s only a matter of time before the next big thing hits the market. Someone or something is killing vampires to steal their hearts, and unlike Rhiannon, this isn’t their first stroll around the undead block.
What I’m talking about:
The story opens with our heroine, Rhiannon, working as a bartender in an exotic dancer bar. She knows the ropes and keeps the place running smoothly. Unfortunately, she is being pursued by not only Disco, but other vampire families because of her ability to see the twice undead (dead vampires) – a very rare gift. The only way to protect herself from the undesirables is to “join” a vampire family… but which one? And after a rough childhood, Rhiannon doesn’t want to be “owned” by anyone ever again.
Rhiannon is a heroine that I can get behind! She is smart, tough, looks out for herself, but doesn’t say no to help and helping others.  I was worried that she would hem and haw in her decision making about joining a family, but she is smart and makes a great decision. She weighs pros and cons at each step of the way, knows how to compromise, but stays true to herself. She is a joy to read.
The beginning of the book was a bit tough for me to understand. The first chapter especially was chaotic and thoughts seem to jump all over the place. I wasn’t sure who was who, and I stumbled a bit. While that did emphasize the chaotic rhythms of the club scene, it made it difficult for me to follow at times. However, after the first couple of chapters, the writing smoothed out and storyline became much easier to follow.
As the story progressed, I become completely engrossed and couldn’t put the book down. I enjoyed watching the delicate friendship between Rhiannon and Disco blossom into a passionate love. I was riveted to the book trying to find out who/what was behind the vampire deaths. It is a great story and fun to read.
BUT I would be remiss if I didn’t tell you the one thing that really put a crimp on an otherwise wonderful story…  The Ending.  Without giving away spoilers, I will tell you that the ending basically sets up a subsequent story and leaves us in a MAJOR cliffhanger. I do not like cliffhanger endings. Plain and simple. And really, I have no problem with the direction Ms. Saare is taking her series. In fact, I actually like the concept. But, for me, this should have been the beginning of book 2 and not the ending to this story.
This is a fun, vibrant story and I recommend it to anyone that enjoys a good vampire, urban fantasy story. Just be prepared for an ending that will twist and leave you hanging.
My Rating:

Liked it a lot – recommend
—–
And don’t forget to enter my 300 Follower mini-giveaway for a chance to win a $10 online bookstore gift card. For entry and rules click HERE.

11 responses to “Review: Dead, Undead, or Somewhere in Between”