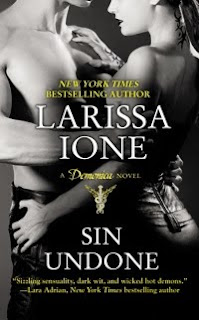 Sin Undone
Author: Larissa Ione
Release Date: August 24, 2010
Publisher: Hachette Book Group
Demonic Series Book #5
ISBN: #978-0-446-55681-1
Genre: Paranormal Romance
I received an ARC of this book from the publisher for the purpose of an honest review.
From the author’s website:
HER TOUCH IS DEADLY
As the only female Seminus demon ever born, master assassin Sinead Donnelly is used to being treated like an outcast. She spent decades enslaved, and now vows she’ll die before she’ll relinquish her freedom again. Then Sin’s innate ability to kill her enemies goes awry: She creates a lethal new werewolf virus that sparks a firestorm of panic and violence.
HIS HUNGER CAN’T BE DENIED
Half-werewolf, half-vampire Conall Dearghul is charged with bringing in Sin to face punishment for the plague. And she’s no stranger: He’s bound to her by blood, and the one sexual encounter they shared has left him hungering for her raw sensuality. Worse, Sin is the underworld’s most wanted and Con soon learns he’s the only one who can help her . . . and that saving her life might mean sacrificing his own.
What I’m talking about:
Picking up right where Ecstasy Unveiled (Demonica Series book #4) ends, the gang at Underworld General Hospital (UGH – hospital for demon/paranormal kind) face a plague that has the potential to eradicate all werewolves. At the center of the outbreak is tough-skinned Sinead (Sin), the sister of Lore – hero from book #4. She recently learned that she is the only female Seminus demon (a true “freak of nature”) and has 3 half-brothers that run UGH. She has been used, abused and all alone for pretty much her entire life.  She feels horrible about what’s happened, but cannot express any emotions on the matter, for as a master assassin, Sin cannot afford emotions or morals.
Even though this is the 5th (and final) book in the Demonica Series, it is written in a way that can be enjoyed by both long-time fans and new-to-the-series readers alike. (Of course, if you haven’t read any of the earlier books I recommend them all!) Ms. Ione gives just enough background to help new readers understand her amazing mythology, without completely rehashing the first 4 books. In addition, the story lines are fairly self-contained to this book. Sin is pretty much new to the Demonica world, so we don’t have a long history in the earlier books. Other than the fact that Sin started the virus in the previous book, everything you need to know is presented for you in Sin Undone.
The intense story lines of Sin Undone are sensational! This book is more actioned-packed that the earlier Demonica stories (with the possible exception of a near-apocalyptic fight in Passion Unleashed), and it works. In addition, there is a lot of political posturing and “behind the scenes” dealing among the various werewolf tribes that add compelling layers of complexity to the story. I was on the preverbal “edge of my seat,” throughout the book. Not only is the staff of UGH trying to save the werewolf race, but also protect Sin from being arrested for her crimes or falling victim to her own assassins (who want to become the next master). Sin and Con are constantly on the move and they take me along with them.
Sin and Con are a pair that work. Even though she is (accidentally) killing off members of his race, Con sees the true light at her core and works hard to save Sin from herself. And as he does, Con realizes he too needs to get over his past so that he can have a future.  Sin stays true to her tough-ass nature, but finds a way to let Con into her life and heart. Ms. Ione has a remarkable talent for exposing raw emotions in her characters in a way that takes me along on their highs and lows.  Each step Con and Sin take in their relationship–the unmasking of true feelings: hurt, abandonment, shame, disappointment, joy, lust, love–are amazingly written and emotionally satisfying.
I also need to mention that Ms. Ione writes some of the BEST smex scenes ever… and this book is no exception!
There is a enjoyable side story involving werewolf, Luc, which is a special treat for long-time Demonica readers, but is just as nice for new fans of the series. In addition, we meet some new players that will spin off into Ms. Ione’s upcoming Lords of Deliverance series (March 2011).
All-in-all a fantastic ride and phenomenal finish to one of my favorite paranormal series.
My Rating:

———–
And don’t forget to enter my 300 Follower mini-giveaway for a chance to win a $10 online bookstore gift card. For entry and rules click HERE.