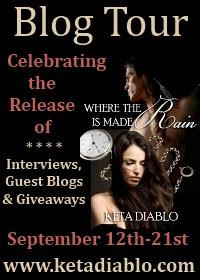 Where The Rain Is Made
Author: Keta Diablo
Release Date: August 27, 2010
Publisher: Decadent Publishing
ISBN: #978-1-93639-412-8
Genre: Historical Romance (Native American), Paranormal (time travel/shifter)
Format(s): e-book available for purchase HERE
Dear Readers… Today I have the privilege of hosting the blog tour for Where The Rain Is Made, by Keta Diablo. Keta and I are glad you stopped by. Learn about her newest release and keep reading for a chance to win a copy of Where The Rain Is Made!
From the authors website:
A decadent savage has captured Francesca (Cesca) DuVall and her brother, Marsh. Now she must spend every waking moment planning an escape. However, she didn’t count on the powerful draw of desire interfering with her scheme in the camp of the brutal Cheyenne dog soldiers.

Ethan Gray is a curator at a national museum . . . most of the time, but when he travels through time to help his beloved People he becomes Meko, leader of the most revered and feared tribe of the plains.

Although their worlds are decades apart Meko can’t resist the dark beauty he kidnapped during a raid. He has many battles to fight but none he wants to win more than the one that will capture Cesca’s heart forever. From the windswept plains of Colorado and the harsh life of a Dog Soldier to the placid life of a curator their love was fueled by passion and kindled by destiny.

You can find out more about Where The Rain Is Made by visiting the publisher’s site, Decadent Publishing. 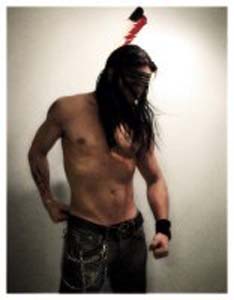 Excepts of the book are available for your reading pleasure now. Click HERE to read Chapter One and part of Chapter Two.
More about the story:
Ethan Gray is a modern man with a good job, but a lonely life. At 25 years of age, he has pledged his existence to helping the Cheyenne Nation (the People) and is considered a seasoned veteran by the Sacred Council. But Ethan isn’t an ordinary man. He is brother to the raven — a shifter — and a time-traveler.  His missions involve traveling back in time as Meko, the leader of the Cheyenne Dog Soldiers, to save as many of the People he can. He is troubled with prophetic dreams and visions of the past that he has yet to experience. But there is one vision he cannot abandon – one of a beautiful dark-haired girl. Who is she? When will he meet her?  As Meko makes yet another leap in time to help his ancestors fight the “blue coats” he thinks he takes captive a young white boy, until he realizes that his captive is the girl that haunts his dreams.
When Cesca, and her brother Marsh, is taken captive by the fierce Dog Soldiers, she thinks of nothing but escape. When she promises not to leave camp and marry Meko, she formulates a plan to help her brother escape his torment. But as her punishment is handed down and she faces possible death, Cesca realizes that she has strong feelings for her dark captor. What will Meko do to save the woman he has come to love?
The GIVEAWAY:

Keta has generously donated one electronic copy of Where The Rain Is Made to my visitors.  You do not have to be a follower of Keta’s or my blog, but we sure appreciate it if you do.  To enter the contest, please leave a comment below with your email address. If you do not want to leave you email address, you can send it to me privately at twimom227 (at) gmail (dot) com.  The contest runs from now until Monday September 20, 2010 at 11:59 PM EDT.  The winner will be posted on Tuesday Sept. 21.  One winner will be selected from those that comment using random.org.  Keta will send the e-book directly to you.
We hope you enjoyed stopping by That’s What I’m Talking About. Keta will be giving away more copies of her book and visiting other great blogs. I’ve included a list of the blog tour stops below. Be sure to visit the other great sites.
Good luck everyone, and again, thanks for dropping by.
Keta is very active on Twitter and would love to have you follow her: http://www.twitter.com/ketadiablo.
WHERE THE RAIN IS MADE BLOG TOUR SCHEDULE:
September 12th
Leilani Loves Books.com
September 13th
Bitten By Paranormal Romance
September 14th
Lovin’ Me Some Romance
September 15th
The Divas Bookcase
September 16th
That’s What I’m Talking About
The Geeky Bookworm
September 17th
Book Lovers Inc. Blog
Jojos Book Corner
September 18
Seriously Reviewed
The Black Raven Erotic Cafe
September 19th
Not Really Southern Vamp Chick
September 20th
Sapphire Realm Romance Blog
Hanging With Bells Blog
September 21st
Happily Ever After Reviews
Talk About My Favorite Authors Blog

13 responses to “Blog Tour: Where The Rain Is Made”