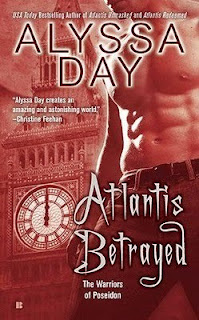 Poseidon’s warriors have learned that the battle to protect humanity produces unexpected enemies–and alliances. And one of the most powerful of all Atlantean warriors will soon find both…in one daring beauty.

A warrior’s mission, a woman’s desire…
What could Christophe, powerful Warrior of Poseidon, have in common with Fiona Campbell, prim and proper Scottish illustrator of fairytales by day and notorious jewel thief known as the Scarlet Ninja by night? Answer:  The Siren, a legendary Crown Jewel that Fiona has targeted for her next heist. It’s said to be worth millions, but to Christophe it’s invaluable. For the Siren also happens to be one of the missing jewels from Poseidon’s trident.

And the unnatural evil that could destroy them both.
But breaking into the Tower of London is a two-person job, so Christophe and Fiona team up to commit the crime of the century. As newfound passions fire their motives–and cloud their judgment–they realize they aren’t the only ones after the priceless gem. A dark force is shadowing their every move, and threatening to shatter their trust with revenge, betrayal, and a haunting revelation about the past.

In the sixth full-length book (and eight installment) of the Warriors of Poseidon series by Alyssa Day, we journey to London. This is the first book that is set outside of the US and away from the on-going and familiar vampire versus human rebels story arc, and it was a refreshing change of pace. This isn’t quite Ms. Day’s typical Poseidon story, but has a lot of  familiar similarities. Although it primarily centers on Fiona and Christophe’s story and leaves out most of the on-going story arc, we still see shifters, vamps and some new supernatural beings.

Self-segregated warrior, Christophe, is hanging around London and is tasked to obtain one of the seven sacred jewels from Poseidon’s trident. His heart isn’t really in the game, but Christophe is looking for a change of pace from the everyday dredge of protecting humans from the power-hungry vampires.  While on a scouting mission to steal the famous gem, Christophe meets the Scarlet Ninja, and after she shoots him and leaves him for dead, he follows her home. He worms his way into her life and the two begin a tentative and passionate partnership.

Although it took me a couple of chapters to get into this story, I became engrossed with the plot and love story.  The book focuses on the jewel heist and when it doesn’t go as planned, the story shifts into a fact-finding whodunit mystery. The tempo was upbeat and the passion was SMOKIN’! In fact, I think that this may be the hottest book of the series. Fiona and Christophe have amazing chemistry and their passion is powerful. I really hadn’t paid much attention to Christophe before this story, but he shines center stage in Altantis Betrayed.  And Fiona is a fantastic leading lady! Both characters are strong-minded and courageous, yet each learns when to give and when to accept support from the other.  I adored that they grew to love each other through and not in spite of their circumstances.  They didn’t find silly reasons not to be with one another and allowed their love to grow and bond them as one.

I had only minor quibbles with the book. I felt that there was a build up of sorts to some of the minor characters in Fiona’s life, but they had no real storyline – mystery but no closure. Also, I felt the final scene of the story was a bit rushed and choppy, but regardless, it was still satisfying.

New characters were introduced, but most were contained within this book. We got a little insight into youngling Warrior, Denal, and possibly a big hint into his future HEA (but his book is not coming soon!) Overall an excellent and steamy ride.

Other reviews of Atlantis Betrayed:

My Review of Atlantis Redeemed (Warriors of Poseidon Book #5)