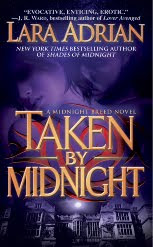 In the frozen Alaskan wilderness, former state trooper Jenna Darrow survives an unspeakable breach of body and soul. But with her narrow escape comes an even greater challenge. For strange changes are taking place within her, as she struggles to understand–and control–a new hunger. To do so, she will seek shelter in the Boston compound of the Order, an ancient race of vampire warriors whose very existence is shrouded in mystery. Perhaps the most mysterious of them all is Brock, a brooding, dark-eyed alpha male whose hands hold the power to comfort, heal . . . and arouse.
As she recovers under Brock’s care, Jenna finds herself drawn to the Order’s mission: to stop a ruthless enemy and its army of assassins from subjecting Earth to a reign of terror. Yet in spite of their resolve, a purely physical relationship without strings soon binds Brock and Jenna together with a desire fiercer than life and stronger than death itself–until a secret from Brock’s past and Jenna’s own mortality challenges their forbidden love to the ultimate trial by fire.

Taken by Midnight picks up immediately where the seventh installment, Shades of Midnight, ends. After surviving a horrific abduction by one of the evil (and thought to be extinct) alien Ancients that spawned the Breed race, Jenna is rushed to the Order’s compound in Boston for protection and observation. There she sleeps for 5 days – but while unconscious speaks an alien language.  After Jenna wakes, she feels good – too good – and wants to go back to her home in Alaska. The fact that there are “vampires” in the world (and she is being cared for by these creatures), is unsettling to Jenna and she just wants to forget it all.  Unfortunately, she learns that the Ancient implanted some sort of alien device in her and it’s changing her body in ways she cannot comprehend.
In addition, Jenna is frighted and horrified to realize that she is drawn to one of the “vampires,” Brock. She wonders if her feelings are true or a by-product of her internal metamorphosis. This is where Taken by Midnight finds its heart. Both Brock and Jenna are frighted by their mutual and growing attraction.  They each struggle with the confusing emotions that voice themselves from within. There were times when I was yelling at Brock not to be an ass, but then he’d turn around and do something so touching, so sweet. At one point I was actually nervous for him as he decided to take a chance and open up to Jenna.  He is a fierce warrior and valiant protector, but allows himself the risk of being hurt by Jenna.  Their story is an ideal mix of raw emotion and hot sex.  Jenna is independent, yet strong enough to realize it is okay to be scared by what is happening to her and admit she may need help. Her internal struggle to maintain complete control or to let loose and allow someone to care for her creates a wonderful story.
But back to the action… This tale is well-balanced between the blossoming romance and the bad-guy-busting activity. Those that are familiar with the Midnight Breed series will enjoy the new twists and recognizable bad guys in this story. Fresh questions are raised, but there is closure on other long-standing issues.  This story provides a view into life at the Order’s compound and keeps the reader up-to-date on all the happenings within the group. This book is an ideal amalgamation of the past seven novels, blending past stories and current affairs. I also enjoyed seeing more of angst-ridden, Chase, aka Harvard. I know his story is coming (but not soon enough), and it will be explosive. New to the series? Ms. Adrian provides enough background for you to jump right in.
I really cannot complain about this story. There were a couple of things I either missed, or were missing – like someone explaining what a blood-bond is to Jenna… It was mentioned to her, but never explained as far as I can recall.  And at one point, the Breedmates were having a frank and graphic discussion about bad guy, Dragos, and the Ancient that captured Jenna, but neglected to remember that a young girl was sitting at the table with them. Sure, Mira has seen a lot for her tender age, but it was like they just forgot she was there.
But in the end, these minor points were just that – minor. This story is an on-the-edge-of-your-seat kind of exciting and the romance between Jenna and Brock is well-developed and sizzling. I honestly was not ready for the book to end when it did. I want to learn more about what is happening to Jenna and what it not only means for the Order, but how it will impact her relationship with Brock.

16 responses to “Review: Taken By Midnight”