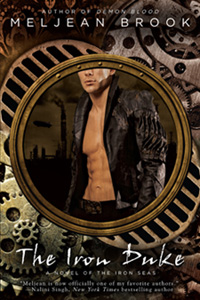 After the Iron Duke freed England from Horde control, he instantly became a national hero. Now Rhys Trahaearn has built a merchant empire on the power — and fear — of his name. And when a dead body is dropped from an airship onto his doorstep, bringing Detective Inspector Mina Wentworth into his dangerous world, he intends to make her his next possession.
Mina can’t afford his interest, however. Horde blood runs through her veins, and despite the nanotech enhancing her body, she barely scratches out a living in London society. Becoming Rhys’s lover would destroy both her career and her family, yet the investigation prevents her from avoiding him…and the Iron Duke’s ruthless pursuit makes him difficult to resist.
But when Mina uncovers the victim’s identity, she stumbles upon a conspiracy that threatens the lives of everyone in England. To save them, Mina and Rhys must race across zombie-infested wastelands and treacherous oceans — and Mina discovers the danger is not only to her countrymen as she finds herself tempted to give up everything to the Iron Duke.

I love this book. Seriously. It’s tough to write a review about something that has stirred such powerful emotions within me. How do I put into words the impact of these characters? My notes are filled with comments like “I feel Mina’s hopelessness” or “the heartache and pain” or “this is why I love this man.” The Iron Duke is an incredible adventure, but it also reached deep into my heart and soul, and won’t let go.
Ms. Brook’s story-telling skills are phenomenal. She has created a whole new world with details so rich and intricate that I could fully imagine life for Mina and Rhys. It is set in an “alternate” universe where modern technology never developed, and in it’s place, a world full of clock-work and steam-powered devices that modern-man could only dream of possessing.  It isn’t a “backwards world” or primitive, just different. And not since I read the Harry Potter series have I longed to jump into a fictional setting and experience the world first-hand.  I am truly amazed at this new universe.
The overall plot is exciting and adventurous. It begins with one dead body and slowly unravels to involve multiple players, imminent danger, genocide, pirates, air ships, creatures taken from old sci-fi books… Just when I thought I knew what was going on, there would be another turn in the investigation. But with all of the action and adventure, one thing that I loved about this book is that it didn’t dwell on drawn out battle scenes. The thrill was in the suspense of hunt.
But truly, the heart of The Iron Dukeis it’s characters.  Mina is an extremely astute inspector, picking up every detail around her – shuffling potential scenarios and possible meanings through her mind. She relies on her extensive experience and knowledge to draw conclusions.  And since the reader is privy to her thoughts and point-of-view, we are able to learn so much about this fantastic world without being directly told. In addition, her minority status (her biological father was Horde), adds complexity to this amazing character.
Then there is the Duke. Rhys drove me insane at times. In my note taking I even resorted to calling him an ass… but that is who he is. Yes – he is EXTREMELY cocky and self-indulgent. He doesn’t understand what makes Mina tick, and for a while, deludes himself into thinking it doesn’t matter.  Then he would have an epiphany:

And now he saw why he had nothing to interest her. She was surrounded by people who would die to protect her, and that she would die for in return. He wanted to be one of them.

And I my heart would sing Hallelujahs… but then he’d go and stick his foot in his mouth and be an ass. He is a real man… not some dreamy alpha that broods and makes up reasons why a relationship can’t work. He honestly doesn’t understand why he wants Mina, only that he needs to possess her. He slowly realizes that his usual bag of tricks won’t work – and to his surprise: that he doesn’t want them to work. As Rhys falls in love with Mina, I fell in love with him.
The exchanges between Mina and Rhys are smart, witty, heart-felt and sexy. They easily slide from political discussions to playful banter to sexy talking, and it all just clicks.  The characters are three-dimensional, and I truly cared about their story.  Ms. Brook created such marvelous characters that I felt every emotion from joy to hopelessness as the characters did. This is what makes the book perfection.
I also need to mention that the side-charters are amazing as well. My favorite is Rhys closest companion and friend, Scarsdale. He is a brilliant sidekick. His friendship with Rhys allows the reader to see various perspectives of the Duke–not just the cocky man he portrays. Scarsdale’s observations and remarks are insightful and sometimes touching, and it is evident that Scarsdale knows the Duke better than Rhys knows himself. Commenting to Rhys just after he meets Mina for the first time, Scarsdale remarks:

I know that look. A fine ship comes over the horizon, and you want what it’s carrying. Let this one sail on, captain.

This book ranks near the top of my all-time favorite reads. I cannot say enough about it. I hope you all enjoy it as much as I did.
My Rating:

Review of the prequel novella “Here There Be Monsters” (Burning Up)
DON’T FORGET: I am giving away a copy of The Iron Duke to one lucky person. Please leave a comment on any of my “The Iron Duke Week” posts to enter (available to US citizens only). For complete rules, please go HERE.
And please note that although the contest is US only, I LOVE comments from all of my readers. Please note if you are not entering the contest!

13 responses to “Review: The Iron Duke”