Welcome to the final day of THE IRON DUKE WEEK here at That’s What I’m Talking About.  Today I want to welcome back author, Meljean Brook, who is here to discuss some of the research she completed while writing the Iron Seas series.  So without further delay… Welcome Meljean… 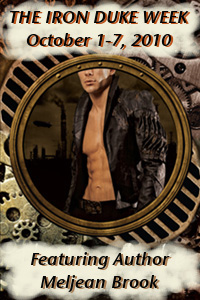 Thank you, Jen.
One of the best parts of writing the Iron Seas series is the research. From nanotechnology to electromagnetic pulse weapons, from steam engines to automatons—it’s all in there…but it all has to be twisted to fit my world. This is the hard part for me. I have an excellent imagination, but I also want all of the technology in the Iron Seas to work (or at least seem like it could work.)
Luckily, when writing alternate histories, real history provides an excellent (and oftentimes, strange) jumping-off point. 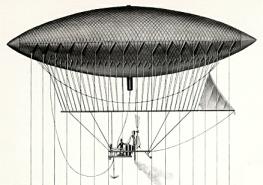 One of the features that shows up over and over again in steampunk is the airship – and for good reason! Balloons and dirigible technologies were immensely popular in the Victorian era, and ballooning demonstrations drew crowds of spectators. Their potential uses were almost endless – as war vessels, as passenger vehicles, they provided a faster (and relatively safe) alternative to ships.
Faster and more maneuverable airplanes eventually replaced the dirigible – but they didn’t in the Iron Seas world. So far we’ve seen skyrunners like Lady Corsair’s airship, which is fast and light – and essentially a wooden ship hanging beneath a balloon. We’ve seen the dreadnoughts, which are enormous military dirigibles that carry a multitude of weapons.
And in “Here There Be Monsters,” we heard mention of personal balloons that can carry two people (imagine a small go-cart beneath a balloon) as well as autogyros (which is a small form of a helicopter.) Unlike the larger airships, these are powered by the humans who are riding in them – usually by pedaling. 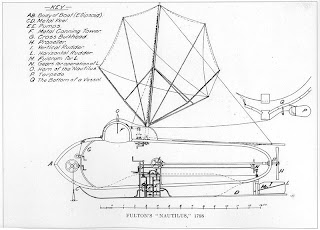 But they weren’t only exploring the skies in the Victorian era – they were beginning to go beneath the sea, too. In the early 1800s, Robert Fulton first began testing his submersible, Nautilus. It wasn’t much more than a copper tube with a snorkel and a hand-cranked propeller – but it worked (and the name of the submarine obviously inspired Jules Verne).
Submersibles in the Iron Seas are essentially the same … with a few exceptions that were designed by a few brilliant people. The problem that almost all submersibles have is the sea itself … and the monsters that swim in it. Very few men or women would want to steer a sub through kraken-infested waters, or try to take on a megalodon shark or an enormous electric eel. 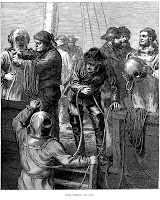 There are those who do it, though – usually because they are looking for treasure. Or, instead of a submersible, some use diving suits similar to those devised in the Victorian era (and that I think most of us are familiar with, in one form or another.)
These suits show up in … well, we haven’t seen them yet. But we will. *grin*

Then there are the automatons, which are devices that are driven by some kind of mechanism (usually powered by clockwork, water, or pressurized gas) and perform simple functions. One incredible example of lifelike automatons is found HERE, and served as the inspiration for the musical automatons that Ivy has to fix in the second chapter of the novella.
There are other, smaller versions of the same types of automatons, which were immensely popular in the late Victorian era. You can see one in action here:
and animals were popular
As you can see, many of these automatons were designed to appear as lifelike as possible. The same is true in the Iron Seas…at least, for the automatons that are popular in the New World. For the buggers in England, the refugees in Scandinavia, and small settlements like Port Fallow (a walled city built in the same location as Amsterdam), the people prefer their automatons to show their gears. There are exceptions, of course (the musicians mentioned above), but generally speaking, only the New Worlders like their automatons’ guts covered up.
And speaking of covering up and devices that perform one simple task … there are the Victorian sexual aids. Being the fragile and overly-emotional creatures that they are, women suffered from hysteria and other disorders, and one common cure was a pelvic massage. Surprisingly, doctors did not enjoy giving these massages, and so several devices were invented to help them out. Here’s one – “The Manipulator” 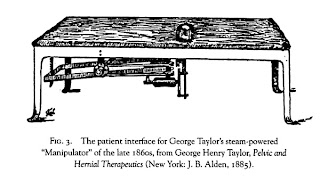 “In 1869 and 1872 an American physician, George Taylor, patented steam-powered massage and vibratory apparatus, some of it designed for female disorders. […] Taylor warns physicians that treatment of female pelvic complaints with the “Manipulator” should be supervised to prevent overindulgence.” (pp. 14-15, The Technology of Orgasm, Rachel P. Maines)
O_o
Some of the Victorian devices range from hilarious to cross-your-legs cringe-inducing…but most of the characters in my Iron Seas series don’t have to worry about being treated for hysteria and emotional disorders (at least, not in that way.) That doesn’t mean, however, that sexual toys and devices won’t show up – and used for reasons both painful and pleasurable. For example, a passage from The Iron Duke:

Nestled in a nightgown lay several small, beautifully crafted automata—singing birds, jumping frogs, clockwork bracelets shaped like kraken . . . and a tiny butterfly. Intrigued, Rhys glanced at Mina, wondering if she knew what it was. The butterfly’s wire legs were designed to gently fit over a clitoris. When wound, the wings would flutter until the vibration brought the woman to orgasm.

Whatever the time period, whatever the history, I think that human nature is human nature … and if people are inventing things, eventually they are going to invent contraptions that offer mind-blowing orgasms. Thankfully, we don’t have to use the “hysteria” excuse anymore.
So this is just a little bit of the technological inspiration that I’ve gotten during the course of my research … and I’m always on the lookout for more (the weirder and wilder, the better.) And it doesn’t even touch on some of the crackpot scientific theories that many Victorians had … but maybe we can make that a guest post for the next book, if Jen will have me again. 🙂
Thank you!

Meljean… Thank you! You are welcome by my blog ANYTIME! What an amazing amount of research must have completed to help create the exciting world of The Iron Seas series.


READERS: Don’t forget… Today is the last day to enter my giveaway for a copy of The Iron Duke.  Contest is open to US mailing addresses only. For complete rules of entry go HERE.


I LOVE to hear from all my readers, so even if you aren’t eligible for the contest, or do not wish to enter, please feel free to leave a comment, just note if you aren’t entering.