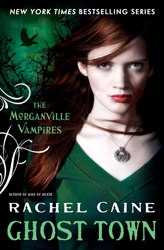 Ghost Town
Author:Rachel Caine
Release Date: October 26, 2010
Publisher: NAL Hardcover
Morganville Vampire Series Book #9
ISBN: #978-0451231611
Genre: Young Adult, Paranormal
Format(s): Hardcover (352 pages), e-book, audio
I received a copy of this book from the PUBLISHER for the purposes of an honest review.
From Goodreads:
The fragile peace between humans and vampires in Morganville is in trouble, and when Claire takes drastic action, she’s put under serious pressure to re-establish the barriers that keep the town residents inside, and wipe the memories of those who leave. But working with her half-crazy vampire boss Myrnin means that things don’t always turn out as planned … and as the people of Morganville begin acting strangely, Claire and her friends must solve the mystery and try to put things right. But one by one, her allies are turning on her … even the ones she trusts most.
What I’m talking about:
This is my first Morganville Vampire book. Yes, I skipped books 1 through 8 and started here with #9. This goes against all of my rules for reading, but I received the book from the publisher and was told that it would be okay to jump in.  And she was right – I was able to read and enjoy the story without knowing the entire history of Morganville. HOWEVER – it was very clear to me that I have missed out on a rich backstory and a lot of character development. I think fans of the series will get much more of an emotional impact from the book than I did.  However, the story captured my interest, and I find that now I want to read the first 8 books to fill in those holes.
Here is the brief background I inferred from reading Ghost Town – Morganville is a unique town – one where humans and vampires coexist in a tenuous relationship. Vampires founded the town (here is where one place I wish I knew more), and they make the rules. Apparently residents cannot leave unless permission is granted by the vampires. Our heroine, Claire, is a student at the local university and is a very special and bright girl. She works for/with the town’s “mad scientist” Vampire, Myrnin. Clare lives with boyfriend, Shane, and best friends, Eve and Michael (a vampire). They have some special privileges granted from the “head” vamp, Amelie – clearly something that happened in earlier books.
In Ghost Town, Claire and Myrnin are working to fix a machine that puts up borders around the town and protects the vampires.  Claire breaks an important law and is forced to help Myrnin complete the machine without rest or sleep. Shortly after it is up and running, Claire notices strange things happening to the residents within Morganville – they seem to be losing their memories from the past 3 years. The gang jumps into action to fix the problem before they all lose their memories of life and each other.
The beginning of the story felt a bit simplistic for my tastes. I don’t read a lot of YA literature because I have a tough time relating to teenage characters these days. There are certain pet peeves I have from the teen scene – the popular bitch, teenage pettiness, etc, and this book had a few of them.  Luckily, those pieces are not a major part of the book, and once the story started moving, I didn’t notice the age of the characters or any of my personal hang-ups.
The action and plot picked up rapidly, and I became completely engrossed, even though I was not familiar with the backstories of the characters and town. Ghost Town is a complex and smart story. Claire is faced with difficult decisions and placed in precarious situations. She didn’t act too young, nor did she seem to have the brain/history of someone much older. The story flowed effortlessly, the book moved quickly, and the plot was filled with crazy twists and turns. The ending of the book is exciting, and I for one will be signing up to read Ms. Caine’s follow-up novel.
My Rating: