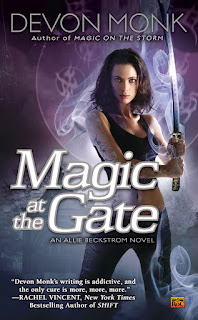 Magic at the Gate
Author:Devon Monk
Release Date: November 2, 2010
Publisher: ROC Fantasy
Allie Beckstrom Series Book #5
ISBN: #978-0451463623
Genre: Urban Fantacy
Format(s): paperback (368 pages), e-book
I received a copy of this book from the publisher for the purposes of an honest review.
From the author’s website:

Allie Beckstrom’s lover, Zayvion Jones, is a Guardian of the Gate, imbued with both light and dark magic and responsible for ensuring that those energies don’t mix. But Zayvion lies in a coma, his soul trapped in death’s realm.

To rescue him, Allie must follow the specter of her deceitful late sorcerer father, Daniel Beckstrom, who is more than familiar with death’s domain. And when Allie discovers that the only way to save Zayvion is to sacrifice her very own magical essence, she makes a decision that may have grave consequences for the entire world.

What I’m talking about:
NOTE: I have not read the first four books in this series.
At the end of the fourth Allie Beckstrom book, Magic on the Storm, the soul of Allie’s true love, Zay, is sent to Death, while is body lies in a coma.  At the start of Magic at the Gate, Allie crosses through a gate and into Death to find Zay’s soul and return it to his body. Her dead father (who also possesses her from time to time) acts as her guide and helps her locate Zay. Unfortunately, he also made a deal on behalf of Allie in order to get her and Zay out of Death. This deal involves Allie giving up the small magic with which she was born (she still has a large amount of magic that was placed in her earlier in the series).  She is also marked by death when she completes this deal.
After getting back to the land of the living and returning Zay’s soul (he remains in a coma), we find out that there has been a lot going on while she was in Death and the magical users find themselves in a war. There are unusual things going on and the Authority (good guys) are trying to keep up with it all. With Zay out of commission, it’s up to Allie and friends to find out how and why Veiled (think ghosts of former magic users) are becoming “solid and living.”
At first, not having read the first four books didn’t bother me – the action was exciting and plot was pretty interesting. I didn’t feel lost and could infer the meaning of most of the magical terminology. I loved Allie right from page one… she is snarky and sharp. She doesn’t take crap from her dad or anyone else.  And although Zay wasn’t awake from most of this book, I got a sense of the love these two Soul Compliments share…

Zay wasn’t in his bed. He was, however, in the bed I’d been in. Looked like he’d gotten there himself, too. The covers on the other bed were hanging down to the floor, and the machine he’d had hooked up to him was turned off, but not pushed against the wall or moved to some other storage place. He didn’t have an IV or oxygen tube. He was on his side, the extra pillow dragged from the other bed and now stuffed under his head. He faced the door and was snoring lightly. He’d taken my shirt I’d left on the bed and held it against his heart.

But as the story reached its climatic scenes, I noticed an emotional void within myself.  The battles were intense, but at the pinnacle, when I should have cared more, I just didn’t. I think it’s because I didn’t know many of the characters. I learned to care about a few – Allie and her lover, Zay, friends Mauve, Victor, Shame & Terric. But the dozen or so others were just names to me.  In addition, some of the complex politics of the Authority and magic users started to weigh down on me.  This is where I think I may have enjoyed the story more if I had read the first four books, and I’d be interested in hearing from those that have read the series.
And a word about Allie’s dad… I’m not sure what to make of him. Is he “good or bad?” I think shades of grey cover his description.  As an “outsider” to the series, I felt like he was trying to help Allie – albeit for selfish reasons.  However, her constant reluctance to listen to him, her mistrust and sometimes almost hatred towards him, started to frustrate me as the book went on.  Then again, I don’t know her history – and apparently Allie doesn’t either, since her dad has “Closed” aka “mind-wiped” her numerous times.  So, maybe this wouldn’t annoy a series regular, but it something that bothered me after a while.
Magic at the Gate is typical of the Urban Fantasy genre: an exciting story that is left open for the next book. The Authority found some answers, but there is so much more going on… The “HOW” may have been answered, but the “WHY” and “what does it all mean?” questions remain. Who is good and who is bad? What is good/bad?  I enjoyed the book and look forward to Ms. Monk’s next installment of Allie Beckstrom.
My Rating:

9 responses to “Review: Magic at the Gate”