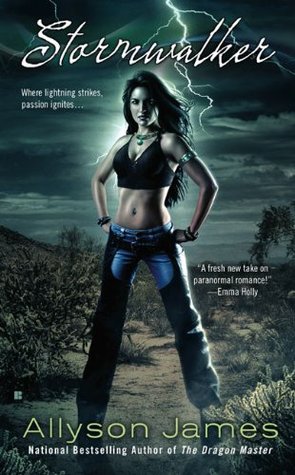 Half-Navajo Janet Begay possesses extraordinary power which is tied to the storms that waft across the desert. The only person who can control her when she’s caught in the storm’s evocative power is Mick, a dark-haired, blue-eyed biker Janet can’t seem to touch with her powers. He can wield fire and not get burned, and Janet’s never sure where he goes when they’re not together.

Together they investigate mysterious disappearances, which Janet fears are tied to her mother’s people, the mythical gods from below the earth. They are helped along the way by Coyote and Crow, but these shapeshifting gods have their own agendas.

Janet Begay is a stormwalker: she can utilize the power of a storm, bending and controlling it to meet her desires.  But this magic comes at a price – it leaves her physically drained and sick. Only her mysterious ex-boyfriend, Mick, can absorb the excess magic and help Janet stay sane.  But Mick isn’t always around and Janet has learned to stand on her own.  So when Mick rides into town wanting to pick up where their relationship left off 5 years ago, Janet doesn’t know what to do. She misses him. She wants him. But he broke her heart.

Janet is sexy and a strong heroine-just the kind I like. She’s tough – renovating a hotel in a town full of folks that don’t necessarily accept her.  Oh, and she is willing to stay in town to face off against the dark forces from Beneath, controlled by her evil goddess of a mother.  She takes hit after hit, but doesn’t give up.  Yet Janet is also vulnerable – she wants to run away with Mick, but knows she can’t. She wants to take the easy road, but won’t. It is these two sides of Janet that make her such a compelling character. She is a super hero and a normal gal all rolled into one.

Janet isn’t the only great character in Stormwalker.  Mick, her on-again, off-again lover/boyfriend is an enigma. He’s sexy, and his love for Janet is sweet. Even though he is a valiant protecter and seems to know everything, there are somethings he just doesn’t understand when it comes to Janet. Or he may get it, but chooses to remain aloof and a mystery. I can understand why Janet is so torn – attracted and frustrated all at once.

There is also Sheriff Nash Jones who is an Unbeliever, and really doesn’t care for Janet.  Yet he seems to possess something that makes him a bit different than the average human. His actions are frustrating at times, but he adds a powerful dimension to the story.  And I have to mention the Mirror – a bisexual magic mirror that injects humor into the story.  There are also several other minor characters that together make this book special.

Stormwalker is a fabulous book. It is one of the most creative and engrossing stories that I have read this year. Containing an ideal mix of world building/mythology, action, mystery, romance and smex, this book was enjoyable from cover to cover!