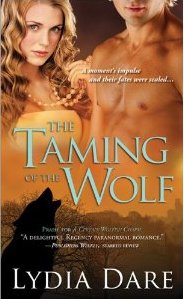 
I received a copy of this book from the publisher for the purposes of an honest review.
From GoodReads website:
Lord Dashiel Thorpe has fought his true nature his entire life, but whenever the moonlight proves too powerful, Dashiel is unable to control the werewolf within him. It is on one such moonlit night that Dashiel accidentally bites the beautiful Scottish witch, Caitrin McLeod. Though now bound to him irrevocably, Cait decides that she wants nothing to do with him. When she flees to her native Scotland, Dashiel has no choice but to follow her and convince her that it was nothing short of destiny that has bound them together body and soul..
What I’m talking about:
Dash is a Lycan – a werewolf – but he was raised to believe he was a monster. Not knowing the truth of his nature, he fought long and hard to repress the beast within, which includes sequestering himself at each month during the full moon. On one such night, Caitrin finds herself stumbling into Dash and the two are drawn to one another. They share a kiss and Dash bites (marks) her. After that, Caitrin quickly leaves. It isn’t until later that Dash finds out that he accidentally claimed Caitrin as his Lycan mate.
The two independently set off to Scotland, but Dash chases down Caitrin at every turn. They even share a carriage (and a room *gasp*) for part of the trip. He is aggressive, obstinate and a typical alpha male. But Caitlin fights back – she is no meek lady. She is equally as stubborn, and attempts to fight her attraction at each turn.  As a witch, Cait can see the futures of everyone around her, except Dash, which infuriates her even more.
The Taming of the Wolf is a delightful historical, paranormal romance. The book was a quick read – although I sometimes stumbled on the Scottish accents. (After a while, I learned to just “translate” the words in my head rather than try to pronounce the brogue.) The romance between Dash and Cait is sweet and humorous at times.  At first I felt that Dash too quickly went from swinging bachelor to wanting to marry Caitrin, but I enjoyed his emotional transformation from “what kind of mess did I get into?” to a sweet and enduring love for Cait. And yes, his alpha male tendencies did annoy me once and a while – treating Cait as a possession and never asking her, but telling her to do something. However, those traits melted away as his obsession turned to love.
One question that nagged me from the start to the end was why wasn’t Dash a wolf in the opening scene? It was a full moon. The Westfield brothers were out enjoying their Lycan nature… It bothered me that Dash was human and other than the bite he gave Cait, seemed in total control.
There are several side stories – a mysterious man at an Inn, Cait’s vision of sister witch Blaire in danger, sweet Alec’s heart-break and future love – which are pleasant additions to the story, but don’t have any real conclusion within this book. I can only imagine that this was set-up material for future books.
I enjoyed reading this book and look forward to future stories from Ms. Dare.
Note: Although this is the fourth book in the series, it is an independent story and can be enjoyed without having read any of the other books.
My Rating:

5 responses to “Review: The Taming of the Wolf”