Today I have the honor of bringing to you author Judi Fennell.  Judi is an award-winning author and writes what she calls “fairy tales with a twist.” Her romance novels have been finalists in Gather.com’s First Chapters and First Chapters Romance contests, and have won numerous RWA Chapter Awards, including the FF&P Prism Award, and the New Jersey Golden Leaf Award. Judi lives with her family in suburban Philadelphia, PA, where she is working on the next book in the Genie Trilogy, Genie Knows Best, set for release in November 2011. Please help me welcome Judi to That’s What I’m Talking About.
Twimom: Judi, welcome and thank you for stopping by.
Judi: Thanks so much for having me! 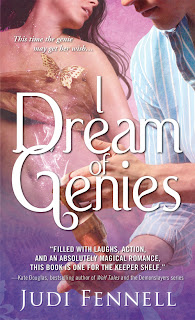 Twimom: How long have you been writing and how did you start? What are your inspirations?
Judi:  I’ve always written. My first story was about a raindrop and written on that big, yellow, lined paper in first grade, complete with illustrations! I won Honorable Mention in a Caldecott Award contest, and wrote my first romance in 9th grade. But I started writing for publication in 2003, joined Romance Writers of America in 2004 and sold my first series in 2008.
Twimom: You upcoming release, I Dream of Genies, is the first book in your new romance series featuring magical genies. What first attracted you to the concept of a heroine in a bottle?
Judi: I’m a child of the 60s and 70s. I grew up on Bewitched, I Dream of Jeannie, The Munsters, Addams Family… campy humor, magic, and love stories. As to what gave me the original idea, I honestly can’t pinpoint it. I just woke up one morning with an idea about a genie who got freed unexpectedly from her bottle, heard the Indiana Jones theme, and there you go.
Twimom: I love all of those shows as well! Can you tell us more about your future plans for this new series?
Judi: The nice thing about magic is that it has all sorts of possibilities. The bad thing about magic is that it has all sorts of possibilities. You have to be careful; magic can solve all your problems, so there has to be a reason for it not to work. I’m pretty surprised at all the ways you can have magic not work. There are two more stories under contract: Genie Knows Best and Leave It To Genie (you can see my sitcom influences), and a bunch of others floating around my head. Now I just have to finish those books and write the proposal.
Twimom: Sounds great! I see you have another series which is about life under the sea. Please tell me more about this interesting looking series.
Judi: My Mer series came out in 2009 and 2010. The trilogy (so far) is about 2 Mer princes and their sister, and the humans who fall in love with them. In Over Her Head is about Erica, a marina owner who’s afraid of the sea and Reel, the second son heir to the throne who have to find some diamonds, escape a sea monster and deal with the death edict on their heads by the Mer royal council.
Wild Blue Under is the story about Reel’s twin (and older) brother, Rod, (yes, their names are supposed to make you chuckle; what can you expect with a father named Fisher?) who has to return a lost mermaid to the sea. The problem is, Valerie not only doesn’t know she’s a mermaid, but she lives in Kansas because she thinks she’s allergic to the sea. When a flock of dive-bombing peregrines and an albatross with an agenda set out to thwart Rod’s plan, the fate of the Mer world is up in the air—literally. 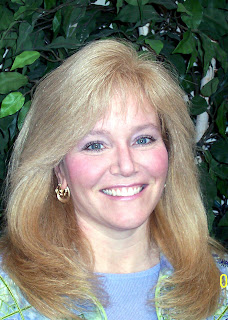 Catch of a Lifetime is about their sister, Angel, a “humanologist” who ends up stuck on land thanks to a hungry shark and encounters Logan and his six year old son, Michael. All Michael wants for his birthday is a mermaid, but all Logan wants is normal in his world. A mermaid is definitely not normal. But when Michael is lured away as bait for the mermaid by the shark, Logan comes to find out that a mermaid is just what he needs—in more ways than one.
There are two more sisters in the royal Tritone family and readers have been asking for their stories, so I’m hoping to get to write those as well. As for future books? Well, as I’ve said to my editor, it’s a big ocean out there.
Twimom: Hmm… those sound exciting *adds to To Be Read Wish List* Do you write any other genres?
Judi: Right now, no, although I have a lot of ideas for other stories: Romantic Suspense, Contemporary, and YA. All I need is more hours in a day…
Twimom: I always like to ask authors about their reading habits… What types of books do you enjoy reading? What was the best book you read in 2010?
Judi: I’ve always read anything I can get my hands on, but I have to say that aside from reading my fellow paranormal romance authors, I gravitate to Romantic Suspense and thrillers. Best book I’ve read this year, hands down, is Kate Brady’s. Actually, both of her books (she was a debut author last year): One Scream Away (she won the RITA Award for Best First Book), and Last To Die. Couldn’t put either of those down.
Twimom: Excellent! What upcoming 2011 releases are you most excited to read?
Judi: Mine. Because that will mean it’s finished and edited. 😉
Twimom: LOL! So true, so true! Judi, once again thank you so much for taking the time to tell my readers a little bit about yourself and your writing. It was wonderful chatting with you.
Judi: My pleasure. Thanks so much for having me and I hope everyone enjoys the (magic carpet) ride in my whole new world!
Readers: You can find Judi on line at
Her Website
Her Blog
Twitter
GIVEAWAY:  I have two (2) copies (two winners) of I Dream of Genies to giveaway here at That’s What I’m Talking About. Thank you to Sourcebooks for sponsoring the giveaway of Judi Fennell’s latest book. To enter, please leave a comment  and your email at the end of today’s interview or tomorrow’s review of I Dream of Genies. Winners restricted to US and Canada mailing addresses, only. Contest open from now until 9:00 PM EST on Friday January 7, 2011. Two (2) winners will be selected from the comment entries using random.org.