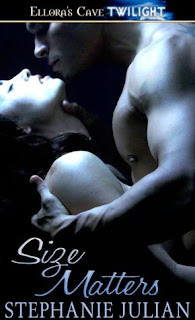 Size Matters by Stephanie Julian
Ellora’s Cave Publishing
September 2010
Carrie woke to pitch black.
She was naked and warm, cocooned between firm, hot silk and soft, warm cotton.
No, not silk. Skin.
Okay, that was interesting. Not bad, just… She didn’t remember going home from the bar with a guy last night.
In fact, she couldn’t remember going to Third and Spruce last night.
And this didn’t feel like home.
What she did feel was safe. And Carrie always trusted her instincts. Before she’d taken the job with the Journal, her father had praised her ability to assess any situation in seconds.
Right now, she sensed the absolute security of her surroundings and the desire emanating from the man—definitely a man—holding her on his lap.
What she couldn’t remember was how she’d gotten here.
She wriggled a little closer to the guy, felt his arms tighten around her and the hard ridge of his erection press against the bare skin of her thigh.
Wow, the guy was huge! Long and thick and… Oh, baby, she really had gotten lucky last night.
Turning her head, she reached out with one hand and encountered firm muscle. His arm flexed under her touch as she smoothed her way up to his broad shoulder then trailed her fingertips over his chest.
And rubbed her thigh against that enticing organ. Thank God she’d shaved her legs yesterday. The guy groaned into her hair.
“Carrie…” Oh, good. He remembered her name. Too bad she was drawing a blank on his.
Didn’t matter. Obviously, she’d gone home with him last night. Maybe she was still a little drunk, not just hung over.
But that ache between her legs… Damn it, she wanted sex. Now.
The dark closed so tightly around them, she could barely see his outline but she moved both hands up and up his body until she finally reached his face. Wow, he must be really tall and she meant really tall because she was no slouch.
At five-ten—without heels which she wore anyway because she looked damn good in them—she typically had a few inches on most men. And of course, she was the kind of girl who liked her men big and strong.
Which made sense of why she’d gone home with this one.
Stubble roughened his broad jaw, sending a shiver of lust through her and causing her to rub against his cock again. God, she loved to hear men groan. It made her feel all powerful, like Wonder Woman. Or that FBI chick from Fringe. She loved that show. Hell, she’d marry JJ Abrams in a heartbeat. The guy had a better imagination than most of the yahoos she worked with.
And she worked with some of the best in the field. Granted, the field wasn’t huge but…
With one hand, she traced his lips, pushing the other into his hair. The guy had lots of it. Down to his shoulders, at least.
Another point in his favor. She must’ve thought she’d hit the lottery last night. Wherever that had been.
And who cared about that now? Shifting around was a little difficult in the dark and she didn’t want to hurt anything vital—namely that gorgeous erection—but with a little help from him, she wound up with her knees on either side of his thighs as he sat upright, her hands on his cheeks and her mouth descending on his.
He seemed surprised at first, his body freezing into stillness, but when she licked at his lips, he got with the program and kissed her back. And great freaking Jesus, the guy could kiss.
His tongue dove into her mouth and twined around hers while his hands grabbed onto her hips and pulled her even closer.
God, he was huge. And she didn’t just mean his cock. Pressed against him the way she was now, she got a better sense of his size.
Her breasts were cushioned against a chest so broad and muscular, the guy had to be built like John Cena, the professional wrestler one of the girls at the Journal had a crush on.
His abs felt like a washboard, which she discovered when she pressed forward to rub her mound against his cock, looking for some relief for the tension in her body.
He broke away from her kiss, but his hips rose slightly, rubbing his cock almost where she needed it to go. Just a little to the left and he’d rub against her clit.
“Whoa, Carrie.” His hands tightened on her hips but didn’t push her away. “Are you sure you’re feeling okay?”
Hmm, maybe she’d had more to drink last night than she remembered. But he was so nice to ask.
“I feel fine.” She trailed one hand down his chest, fingers brushing against the tip of his cock. “And you feel amazing.”
She wished she knew his name but didn’t want to embarrass herself or him by asking for it. Later, after she satisfied this urge to jump his bones, she’d figure it out.
Right now…not caring so much.
Especially when she wrapped one hand around his cock and realized her fingers didn’t meet.
Thank you, Goddess of…well, whatever goddess handled huge guys with accessories to match.