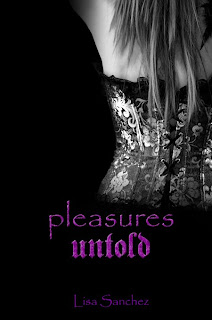 Pleasures Untold
Author: Lisa Sanchez
Release Date: February 8, 2011
Publisher: Omnific Publishing
Hanaford Park Series Book #2
ISBN: #978-1936305599
Genre: Paranormal Romance
Format(s): paperback (191 pgs), e-book
I received a e-ARC of this book from the PUBLISHER for the purposes of an honest review.
From Goodreads:
Hell hath no fury like a witch done wrong. Pissed off and packing an arsenal of witchy mojo, Martha is on the warpath. Determined to avenge the murder of her mother and grandmother, her mission is simple: kill every vampire, demon and underworld bastard she comes across, because one of those hell beasts might be the monster that stole her childhood from her. But when a sexy Latin vamp literally falls from the sky, saving her from becoming an undead Happy Meal, she has no choice but to reassess everything she thinks she knows.
Xan is an anomaly–a vampire born, not turned. A powerful warlock who walks in daylight, Xan spends his days, and nights, watching over Martha, protecting her from Lucian, the blood-sucking monstrosity whose sole mission in death is to drain her dry. Undeniable attraction and the promise of pleasures untold draw the two lovers into a frustrating dance of one step forward, two steps back. When Lucian throws down a deadly ultimatum, Martha is forced to choose between relying on her own mystical woo woo to save the lives of her stolen friends or succumbing to the lure of dark, voodoo magic. Xan and Martha must work together to save those closest to her and put an end to Lucian’s reign of terror before it’s too late.
What I’m talking about:
Lisa Sanchez’s sophomore release opens with a trio of roommates heading for a night out after one of the girls broke up with her cheating boyfriend. Never one to conform with the crowds, Martha uses wit and sarcasm to pass the time as they wait to enter the club. Things quickly take a turn for the worse when one roommate heads off alone with a vampire disguised as a co-ed. Using her Wiccan and slaying skills, Martha takes on the undead romeo and finds herself face-to-face with the man of her dreams, literally.  Soon after, Martha’s world begins to turn on edge as she discovers secrets about her own past that have been long hidden.
Pleasures Untold is the second story in Ms. Sanchez’s Hanaford Park series about paranormal activities on/near a college campus. Although Martha and her roommate Jessica appear in the first book, Eve of Samhain (my review HERE), the stories are independent of one another and can be enjoyed individually.  Pleasures Untold is told in first-person POV from Martha’s perspective.
I completely enjoyed Martha’s snark, wit and humor. Her one-liners had me rolling from the get-go.  I also liked how she spoke directly to the reader at times. It’s not the norm for a paranormal romance, but it works. She is a bit flawed – selfish and childish in her behavior at times. But she learns and grows, which provides great satisfaction for me. I did find myself annoyed with Martha’s sudden loss of brain function at times. For example, she lectured her roommates about the dangers of leaving the club with an unknown guy because of the evil that likes to prey at clubs. Yet when her “spidey senses” go off while watching a girl getting into a limo with an unknown male, she blows it off. *headdesk*
Xan is hot. He’s a tortured soul due to experiencing a number of emotionally devastating events throughout his long life.  I liked his strength and sincerity, but he was a bit too brooding at times for my tastes.  He played the conflicted hero well, but it bothered me sometimes, and I wanted him to just admit his feelings and dive in head-first. He and Martha play a drawn-out game of “does he like me?” and while rewarding in the end, it did go on for almost the entire book.
The plot involved a big bad vampire who has been chasing after Martha and her family her whole life. It provided some excellent tension and exciting action. There were also some interesting plots twists – most of which I was able to figure out, but found compelling none the less. There were a few unanswered questions, but it didn’t impact my overall enjoyment of the book. Pleasures Untold is another delightful read from Ms. Sanchez.
My Rating:

Liked it a lot – recommend (B+)
GIVEAWAY:  I have two (2) electronic-copy SETS (two winners) of Lisa’s Hanaford Park series: Eve of Samhain and Pleasures Untold, to giveaway here at That’s What I’m Talking About. Thank you to Omnific Publishing for sponsoring the giveaway. To enter, please leave a comment and your email at the end of today’s review of Pleasures Untold. One entry per person. Contest open from now until 9:00 PM EST on Saturday February 19, 2011. Two (2) winners will be selected from the comment entries using random.org.