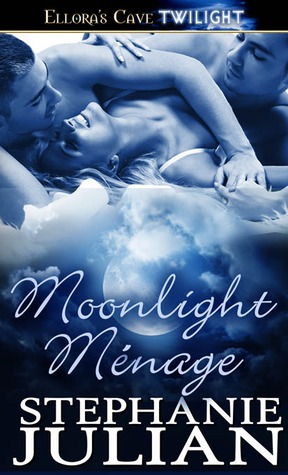 For eight years, Etruscan witch Tira Belludi has longed for the two shifter men who hold her heart. But visions of death and fears for her sanity have forced her to keep her distance.
Nic Rocca and Duke Ducati are brothers in everything but blood and partners who have each other’s backs. They share a home, a job and had planned to share their life with Tira between them…until she saw their future and built a wall around her heart.
Now danger and death stalk Nic and Duke. And Tira must make a choice—grab love while she has the chance or watch Nic die from afar and lose Duke forever.

Tira Belludi has inherited the gift of “Praenuntio” (foresight) from her mother, but views it as more of a curse. Nic Rocca and Duke Ducati have loved Tira for years, knew instantly she was their mate, but have all but given up on ever finding happiness together since Tira pulled away from them after she foresaw the death of one of their trio, and the destruction of all that remained of it.
Moonlight Ménage is the second book in Julian’s Lucani Lovers series, and while the sex was hotter, Tira’s evolution left me hoping for a little more. Unlike, Tamra, in Kiss of Moonlight, Tira is overwhelmed and cowed by her circumstances throughout most of the novel. By comparison, Nic and Duke are rich, vibrant characters that bear the weight of the story’s conflict well. I did feel sympathetic to Tira’s situation, but wish she’d fought more resolutely for her heart’s desire earlier on.
As to the sex…while I’ve certainly read naughtier depictions (*blush*), Moonlight Ménage definitely ramps it up a notch. Or two, to be more specific. This is a strictly heterosexual ménage a trios, as Nic and Duke never interact sexually with each other, but share Tira as their mate. They are two straight men sharing a sexual relationship with one woman at the same time. Once they all decide to take what they want despite the fate they’d previously accepted, they have a string of encounters, one after another, to make up for lost time. The terminology Julian uses during these scenes isn’t overly skeevy, nor is it too precious, and allows the imagery she’s created to really come alive. And it is some very nice imagery, I have to say.
The main plot of the series has become more interesting with this novel, as well, although it definitely takes a back seat to the trio’s relationship. When all the characters come together for the battle at the end of their personal journeys, the story itself really takes off, setting the stage for the next novel, while allowing Tira, Nic, and Duke to embrace the happy ending they’ve been striving for.
Moonlight Ménage does a bit of many things quite well, but overall it didn’t leave me breathless. I definitely liked it enough to be excited about the next novel in the series, however, and the sex scenes kept me raptly turning pages the whole way through. The first two novels compliment each other very well, and I strongly feel that this is a case where the individual stories will lead to a captivating, exciting, and sexy series that’s well worth reading.