Dead, Undead, or Somewhere in Between by JA Saare
Eternal Press. 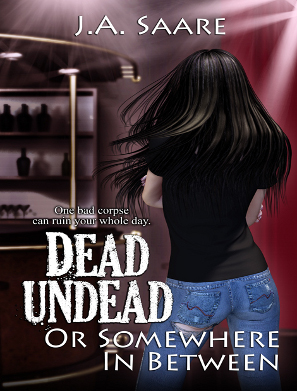 February 2010
I tasted the metallic bitterness of my blood on his lips and shared his lingering essence by pulling the tip of his tongue into my mouth and sucking softly. He growled, hands rough against my hips, dragging me downward. Uncontrollable warmth spread through my body, in places I wanted him to touch, and I ground my hips deliberately against his pelvis, moving my hands lower, latching onto that perfect mound of flesh on his ass to pull him against me.
He ripped his lips away. “You can’t know how badly I want this,” he groaned next to my ear, kissing the tender spot just behind. I didn’t speak, using actions to convey my agreement, bringing my hands up to cradle his face and draw his lips to mine.
But it wasn’t enough, not nearly enough…
I raked my nails up and down his back, bringing them around to his chest. The skin was cool and firm, and I arched my back, pressing my aching nipples against him, desperate to ease the burn.
“Rhiannon.” He pulled away, hands holding either side of my face to prevent me from interrupting him. “I want to take you to my bedroom, and love you until the sun comes up. But if I do, you’ll hate me in the morning. I would despise myself for allowing that.”