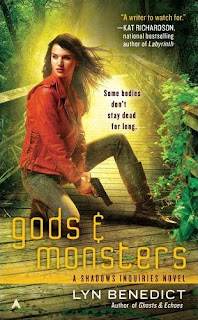 Author: Lyn Benedict
Release Date: April 26, 2011
Publisher: Ace Books
Shadows Inquiries Book # 3
ISBN: # 978-0441020386
Genre: Urban Fantasy
Format(s): paperback (311 pgs), e-book
I received a copy of this book from the PUBLISHER for the purposes of an honest review.
From the back cover:
Sylvie Lightner is no ordinary PI.  She specializes in cases involving the unusual and unbelievable, in a world where magic is real, where hell just around the corner – and where death isn’t the worst thing that can happen to you…
When Sylvie discovers the bodies of five women in the Florida Everglades, she believes their deaths to be the work of a serial killer and passes the buck.  Or at least she attempts to.  When the bodies wake and shift shape, killing the police, Sylvie finds herself at the heart of a potentially lethal investigation.
With the aid of a necromancer, Sylvie learns that the women are victims of a sorcerer who combines alchemy, shape-shifting, and death magic into a gruesome whole.  As more bodies pile up along the Gulf coast, Sylvie is determined to stop the sorcerer.  But how do you defeat a man who can manipulate the dead without becoming one of them yourself?
What Gikany is talking about:
Sylvie Lightner (aka Shadows) is a private investigator who specializes in cases involving the Magicus Mundi.  The Magicus Mundi is a world filled with magic, monsters and gods that surrounds the ordinary world that most of us live in.  The vast majority of people are unaware of this world simply because they choose to be unaware of it.  Awareness of this world makes you vulnerable to the dangerous elements that exist within it.  When the Magicus Mundi intrudes into the lives of ordinary people, they turn to Sylvie Lightner and Shadows Inquiries for help.
Gods and Monsters picks up immediately after the conclusion of Ghosts and Echoes.  Sylvie has been hired to find a missing woman whose husband believes she was abducted by aliens.  Sylvie discovers that a powerful sorcerer has abducted the missing woman.  The sorcerer has placed her, and four other women, in a state of suspended animation and is using them to break a curse.  Sylvie has to turn to Tierney Wales, a necromancer for help.
One of the things that I like the most about this series is that Sylvie Lightner is able to defeat people and monsters that are far more powerful than she is primarily through sheer grit.  Sylvie refuses to yield to anyone at anytime.  The force of her will, combined with a resistance to most magic, allows her to combat most of what is thrown at her.  An encounter with hostile gods, murderous sorcerers or enraged monsters may leave Sylvie beaten and battered, but she always somehow seems to struggle to her feet.
The author has a wonderful sense of humor that had me laughing out loud at times.  The minor characters add to the richness of the book.  The most important of which are Alex and Erinya.  Alex, Sylvie’s business partner, provides Sylvie with the voice of reason and is the only person in her life that she can’t chase away.  Erinya, one of the Greek Furies, is one of the few individuals capable of backing up Sylvie during her encounters with the more dangerous elements of the Magicus Mundi.
I enjoyed this book and look forward to finding out what happens to Sylvie next.
G’s Rating:

4 responses to “Review: Gods and Monsters”