The Cold Kiss of Death 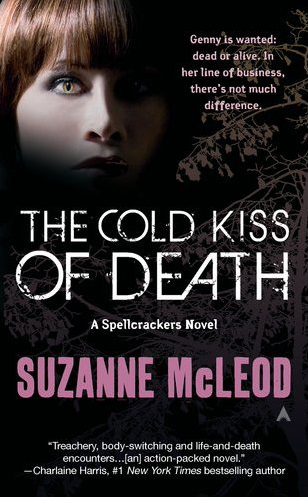 Release Date: April 26, 2011
Publisher: Ace Books
Spellcrackers Novels Book #2
ISBN: #978-0441020393
Genre: Urban Fantasy
Format(s): Paperback (336 pages), e-book
I received a copy of this book from the PUBLISHER for the purposes of an honest review.
From the author’s website:
Genny Taylor works for Spellcrackers.com ± Making Magic Safe. But her own life is anything but safe!
‘The ghost grasped her shift and ripped it open. The three interlacing crescents carved red-raw and bleeding into her thin chest didn’t look any better than the last dozen times I’d seen them. The wounds weren’t lethal – they weren’t even recent; she’d been dead for at least a hundred and fifty years – but my gut still twisted with anger that someone would do that to a child.’
Being haunted by a ghost is the least of Genny’s problems: she’s also trying to deal with the witch neighbour who wants her evicted. Finn, her sort-of-Ex – and now her new boss – can’t quite decide whether he wants their relationship to be business or pleasure. And then there’s the queue of vamps inviting her to paint the town red; how long before they stop taking no for an answer?
Just when it seems things can’t get any worse a human friend is murdered using sidhe magic. Determined to hunt down the killer and needing help, she turns to one of London’s most capricious wylde fae and the seductive vampire Malik al-Khan.
But all too soon she realises she doesn’t know who she can trust – and now Genny’s the one being hunted, not just by the police, but by some of London’s most powerful and dangerous supernaturals.
What Gikany & Una are talking about:
Well, where do we begin?  Let’s start by saying that overall we enjoyed The Cold Kiss of Death.  The premise, world and characters were engaging and interesting.  Spellcrackers is the type of series where you do feel dropped into the middle of a puzzle and will have to slowly fill in the missing pieces.  The main character, Genny, tends to be a little bratty, showing herself as the princess she was raised to be.  However, for someone that is supposed to be quite powerful, we could not understand why she is unable to figure out how to use that power now that she is an adult and finally surrounded by those who could teach her.  Genny is very secretive and while this trait leads her into trouble; it doesn’t always explain the situations she finds herself in.  The most preposterous thing that Gikany found in this story is that Genny was framed for murder and yet, since she is fae, they could ask her three times and she would be forced to tell the truth.  Why does she really need to run around and get not only an alibi but find the killer to prove her innocence?
Although the mystery/detective drama portion was entertaining and a fairly good ride, there are moments that boggle the reader’s rational mind.  The majority of the story was clouded by confusion.  The Cold Kiss of Death had a ‘hurry up and wait’ feel to it, with the action summed up in a few words that did not allow the reader to follow all of the nuances of the scenes and their implications nor experience the action themselves.
Overall we enjoyed this novel though there are a few issues which could be resolved with strong editing.  Although we don’t classify the ending as a cliffhanger, there are still unresolved issues that we would love to see the resolution of.  We look forward to the next book in the Spellcrackers series.
Their Rating:

Liked it, we had a few issues – recommend (B)

2 responses to “Review: The Cold Kiss of Death”