Today I am doing quickie reviews for 2 of Jill Myles self-published titles. The books are available at Amazon, Smashwords and All Romance for next to nothing… so what are you waiting for?
I received an e-copy of these books from Jill for the purposes of an honest review. 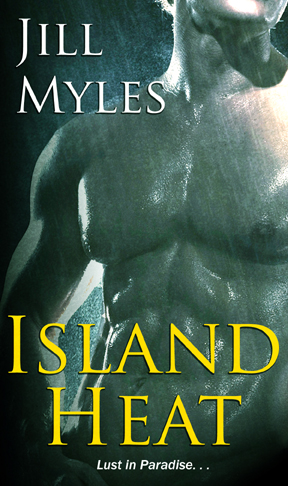 Island Heat
Release Date: February 28, 2011
Publisher: self-published
Genre: Paranormal Romance
Format(s): e-book
From the author’s website:
On a business trip to Bermuda, realtor Diana Holcomb’s small plane goes down over the ocean, a victim of the infamous Bermuda Triangle.
Diana wakes up to find herself on a deserted island…that really isn’t all that deserted. First, a gigantic dinosaur tries to eat her. Then she’s captured by cavemen, and just when things are looking their worst, she’s rescued by none other than a gorgeous man with the body of an Adonis and the jungle skills of Tarzan.
Salvador’s been stranded on the island for a very, very long time without a woman. A very, very long time. And now that he has Diana, he intends to claim her for his own…
What I’m talking about:
Poor Diana… always looking for the next commission, this realtor has her hands full with her latest client. When he invites Diana on a business trip to the Bermuda Triangle, she didn’t realize it would be for funny business.  But once the plane crashes, Diana has to forget all she knows and embrace island life.
This story is Jurassic Park meets LOST.  There are dinosaurs, cavemen, and remnants of past (??) survivors that date back centuries. Salvador is generous, adorable and alpha… just how I like my men! Diana is a bit whiny, needs help managing her anger, and slaps and swats Salvador entirely too often.  But I suppose I could cut her a break since she’s just been dropped onto this crazy island.  There are some great moments of humor in the book. Island Heat is a cute story with a fairly substantial plot line and character development.  There are some enjoyable twists and turns, and the ending, while predicable, was satisfying.
My Rating: 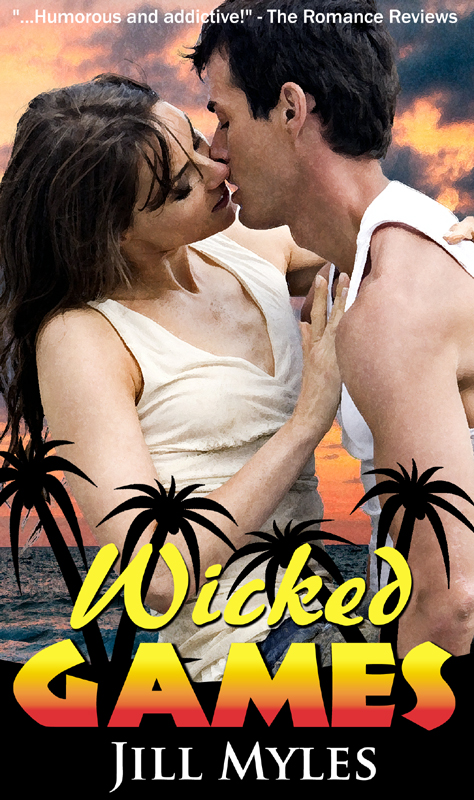 Wicked Games
Release Date: March 2011
Publisher: self-published
Genre: Contemporary Romance
Format(s): e-book
From the author’s website:
Abby Lewis never pictured herself on the survival game show, Endurance Island. She’s just not the ‘survival’ type. But when her boss offers her a spot on the show and the opportunity of a lifetime, she packs her bags and heads to the tropics to be a contestant. Once in the game, though, it’s clear that Abby’s in over her head.
No one’s more competitive than sexy, delicious – and arrogant – Dean Woodall. Sure, he’s clever, strong, good at challenges, and has a body that makes her mouth water. He also hates Abby just as much as she hates him. That’s fine with her; she’ll just ignore the jerk.
But the rules of Endurance Island are working against them. Abby and Dean are teamed up – alone – on the beach. It’s either work together, or go home. Stuck with no one’s company but their own, they learn they might just make a good team after all.
And Abby learns that with just a little bit of kindling, the flames of hate can quickly turn to flames of passion…
What I’m talking about:
I’m going to start this review by saying I am a bit surprised how much I enjoyed this story… First, I hardly ever read (and enjoy) contemporary romance and second, I am NOT a fan of Survivor – I don’t even watch reality TV.  But leave it to Jill to create such a likable book.
Abby is a pretty good lead – she is unsure of her capabilities, but never quits. She is basically forced onto this show, but makes the most of the situation, even surprising herself and others with her ability to win.  She can be a little childish at times, but it didn’t really bother me. Dean is another sexy, gentle lead male. He is in it to win the game, but ends up with a greater prize than he could imagine.
I love that although the story is told in the first person POV from Abby, at the beginning of each chapter, we get a blurb from Dean’s “diary.” So readers are completely aware that he is falling for her, while she has no clue. I think that may be part of the reason I got a little frustrated with Abby, because she was so quick to believe the worst in people when she got voted off the island, and she wasn’t aware of what was going on behind the scenes.
Wicked Games is a sweet and fast-paced contemporary romance with good character development and substantial plot lines. Abby and Dean are HOT together (let me tell you I was sweating during the shower scene)! Even with the misunderstandings and horrible “Survivor” conditions, the two make a great couple that you can help but route for.  All-in-all, a very enjoyable read.
My Rating: