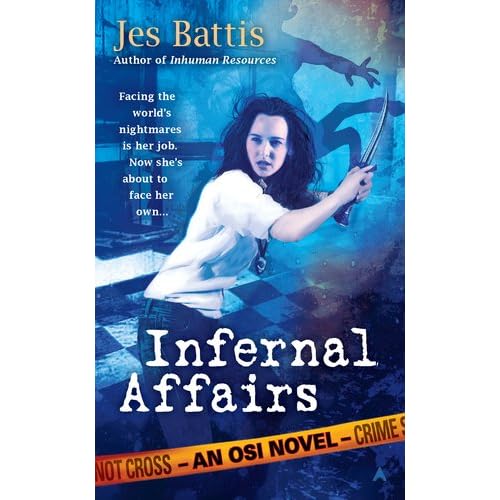 Author: Jes Battis
Release Date: June 2011
Publisher: Penguin Publishing
OSI Series, Book 4
ISBN: #9780441020454
Genre: Urban Fantasy
Format(s): Paperback (320 pages), ebook
I received a copy of this book from the PUBLISHER for the purposes of an honest review.
From the author’s website:
Being on the night shift as an Occult Special Investigator means losing track of what’s normal—or safe. And hiding a childlike demon named Ru from a four-legged bounty hunter qualifies as neither—even for Tess Corday. It doesn’t help that tensions have been rising between her and Lucian—her partner in the professional AND personal sense.
Drawn into an investigation that spans multiple worlds, Tess must confront the one thing she’s dreaded most of all: her family’s own demonic past. Being mage-born, she never knew who—or exactly what—her father was. And she’s about to come face-to-face with the one power across the worlds that can answer the mystery of her past…if it doesn’t kill her first.
What B is talking about:
Tess Corday has her hands full. She lives with her friend who’s a mind reader, a college-aged vampire, and a teenager who would also be a vampire if she weren’t taking medication to stop her transformation. She’s also dating a necromancer, isn’t sure who her real father is, and she works the night shift for an agency of paranormal investigators. Throw in some inter-dimensional baddies, and is easy to see why she’s sleep deprived. But, as long as somebody keeps the coffee pot full, she’ll be okay.
For all that, I really liked this book. It’s suspenseful, never stops moving, has very interesting characters, and fully embraces the art of the snarky response. I had to keep my browser open to Dictionary.com for a lot of it, but I think that’s a good thing.
Battis seems to know a lot about everything: from specific autopsy methods (Rokitansky) to a proper reference to erythropoietin (a hormone that promotes the formation of red blood cells) levels. I had to look up both because I had no idea what they were. The plot is easy enough to follow without handy reference materials, though. Every scene is rich with details, and the dialogue is explanatory enough to keep the story “friendly.” Battis never talks down to the reader, but there are a lot of specialists and experts in the novel, and he lets them do their jobs.
I always regret not being able to read a series from the beginning, because there are generally a lot of details that need to be filled in along the way. Not surprisingly, the first couple of chapters of Infernal Affairs were a little confusing, but I was able to catch on pretty quickly. After the initial crash course, I’m happy to say, I had a hard time putting it down. This story moves fast, and I thoroughly enjoyed trying to keep up.
The characters’ interactions with each other are a lot of fun, too. They’re all a family in so many ways, and it shows in how they deal with one another. Even when she’s worried, Tess manages to be cool and a little sarcastic, but it seems that’s a requisite trait in their line of work. The good-natured ribbing eases a lot of the tension throughout the novel in addition to making the camaraderie between them feel authentic.
I thoroughly enjoyed reading Infernal Affairs, and learned a few new things along the way. Tess is a strong female character who’s caring without being mushy and the story doesn’t ever become stagnant. After reading up on the other titles in the OSI Series, I’m adding the entire series to my list of novels I very much want to read.
My Rating: