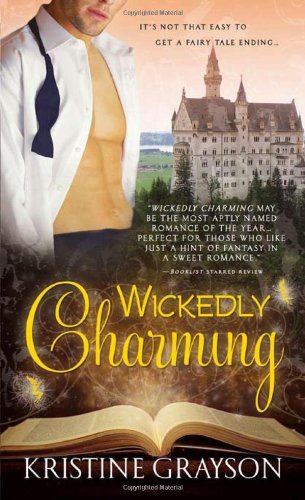 I received a copy of this book from the PUBLISHER for the purposes of an honest review.

He’s given up on happily-ever-after…

Cinderella’s Prince Charming is divorced and at a dead end. The new owner of a bookstore, Charming has given up on women, royalty, and anything that smacks of a future.
That is, until he meets up with Mellie…

But she may be the key to happily-right-now…

Mellie is sick and tired of stepmothers being misunderstood. Vampires have redeemed their reputation, why shouldn’t stepmothers do the same? Then she runs into the handsomest, most charming man she’s ever met and discovers she’s going about her mission all wrong…

This novel has one of the more interesting premises I’ve seen in a long time: how fairy tales got it all wrong. Grayson does a wonderful job of ripping up fairy tale stereotypes and stomping on them a few times for good measure. The evil stepmother? Beautiful and misunderstood. Prince Charming? Slightly paunchy…but still charming. Snow White? Malicious and vindictive. Cinderella? Borderline psychotic. Which I really liked!

Both of the main characters in Wickedly Charming are “middle aged,” even though they’re both stunners of the highest order. Prince Charming and Mellie have both had their share of shattered dreams and have given up on ever finding happiness with another person. Until they meet each other at a book fair, of course (he’s there to grab as many books as he can for his bookstore, and she’s there protesting the unfairness of fairy tales).

I had a difficult time getting into this story at first. It was hard for me to accept these characters as flawed, while so much is made about their beauty. The beginning seems to go in circles a fair bit of the time as well. Then, almost mid-way through the book, the main characters become involved in a three person barb-tossing contest in a coffee shop, complete with funny commentary from the other patrons, and suddenly the novel came alive. By then, the blending of the two worlds in the story was comfortable and the characters were quickly earning my support.

Grayson has a lot of unconventional things going on in Wickedly Charming, some of which worked, and others that didn’t. Occasionally there were almost too many competing conflicts at once, but everything gets sorted out in the end of the story. Once the novel started to move at a stronger pace, I enjoyed it a great deal, including the “maybe ever after” ending.

Wickedly Charming is a fun, highly imaginative story that sets out to turn conventional fairy tales on end and does so very well. Although it gets off to a slow start, a little patience will be well rewarded as these characters defy every stereotype and finally find some happiness of their own.