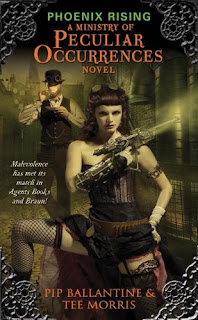 For a few moments, only the low rumbling of the Ministry’s generators filled the space.  Wellington read the Daily Mail headline several times and tried to remember to breathe. He felt the confession on the tip of his tongue, but he was too far invested into this forgotten case now. He would probably meet the same fate as Agent Braun, even if he withheld nothing from the Director about what he and Eliza had really been up to in their brief time together.
As if in answer to Wellington’s prayer, Eliza asked, “Could it be the House of Usher, sir?”
“Well, Agent Braun, the black carriage with–”
Doctor Sound turned the newspaper back around and, after a moment, began reading. “–‘wheels of nefarious construction smiting down innocents as would the scythe of the Reaper’ does sound very House of Usher, but then I have to stop and consider the other particulars in this story.
“Note, if you will: ‘Eyewitnesses report that Mistress Death was locked in mortal combat with a hansom that kept chase, its drivers a man and a woman lacking modesty most proper.’ Now, here is a detail I find most curious: ‘The heroic hansom did carry a lone passenger, the man’s purpose unclear as all he seemed to be doing was screaming as would a banshee of the rolling moors of West Yorkshire.’ What do you make of that, Books?”
Wellington felt his tongue swell. He found himself totally paralyzed by the cool, steely gaze of the Director. His mouth went to open, his throat dry as if he had been walking through an Egyptian expanse.
“As I read about such outrageous behaviour from the subjects of Her Majesty,” Doctor Sound said, folding the newspaper and placing it where the seventh vase should have been, “I thank God in heaven that I am the director of a clandestine organisation where our specialty is our subtlety.”
He slowly turned to Eliza, his eyes narrowing on her. “Isn’t that correct, Agent Braun?”
Eliza nodded. “Most of the time, sir.”
“Yes,” he agreed. “Most of the time.” Sound’s eyes went back and forth between them both, and Wellington could feel a tightness in his chest.
“Well then, I shan’t keep you. I just thought I would pay my Archives a visit, and I am quite glad I did so.” He took in the shelves, the massive difference engine and its vast network of pulleys, and finally their shared desk, and he nodded approvingly. “I should do this more often. So please, if I ever do pop down ther when the mood strikes me, just go about your business. Pretend as if I am not here.” He lifted a figure up to his mustache and tugged at it a bit. “You can do that, can’t you?”
With a final look at the tow of them, Doctor Sound headed for the stairwell. “Agent Braun, Agent Books, good afternoon.”