Dear readers. NO… Unfortunately I did NOT attend the marvelous gathering that Ms. Lori Foster throws every spring. However, my dear friend, Nima (short for Nissan Mama) did attend the public signing. Being the amazing friend that she is, she wrote up this wonderful post and took some photos so that we could share the experience with you all.
Nima claims to be an apprentice fairy godmother. Until she earns her wings, she spends her time as a spinning instructor, riding her bike around the suburbs of Cincinnati, Ohio, and consuming large quantities of chocolate.  She plays the flute, loves to read, and has issues with paper clutter.  She’s in total denial that she has a college student in his twenties, but as a peri-menopausal woman likes that her other two children are teenagers because life is so much more fun when everyone’s hormonal.  Her husband escapes the insanity by taking to the road on his Harley.  Nima encourages this because who doesn’t love a man in leather?
Amazingly, to her anyway, Nima is a published author.  Her emphasis has been non-fiction in periodicals and documentary scripts.  She has worked as on on-line video editor and voice-over artist.  At present she is attempting to actually finish her first fictional novel, but is easily distracted by sparkly objects and all the books in her to-be-read pile.
Nima will likely show up here when you least expect her. Please help me in giving Nima a warm welcome here at That’s What I’m Talking About!  Take it away Nima…
*hangs head in shame*  I didn’t know.  I didn’t know!   I swear I didn’t know!
I live in suburban Cincinnati, Ohio.  There is a best-selling author, you might have heard of her, Lori Foster, and she lives in Ross, Ohio, about 30 minutes from my house.  Every year for the last five years she has worked to sponsor this little affair un-astonishingly called the Lori Foster Reader and Author Get Together.  Sounds intimate and low key, doesn’t it?  Quaint even.  Yeah, not so little.  Why did no one tell me this was going on in my back yard all these years?! 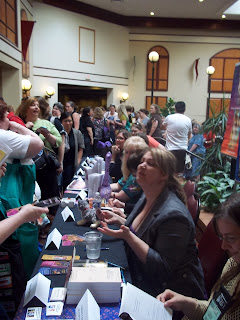 A few weeks ago I got an event invite on my Facebook.  The only reason I didn’t hit delete immediately was because Nalini Singh’s name flashed before my anxious-for-Hawke’s-book eyes.  I was thrilled to discover the New Zealand author was not only going to be in the United States, but fifteen minutes away!  I did not go to the event website to register for the three day weekend symposium, erroneously thinking the  “get together”  would be full of local, struggling authors with Singh as a main-liner who would blow in and out, mostly just for the signing which was open to the public.  I was excited for the signing and meeting her and that was enough.  I clicked “attending” and didn’t think about it again until Hawke’s book was released.

I finished Hawke’s book yesterday, closed it with a sigh, and was giddy that I would be meeting Singh in less than 24 hours.  Today, my car thermometer said the outside temperature had hit 100 and I was glad to be heading for air conditioning at the Marriott in West Chester, Ohio.  I had no trouble parking and walked into the lobby forty-five minutes ahead of the signing, hoping the line wasn’t already too long.  Hoping, that not many people had heard about this signing and I wouldn’t be subjected to the long lines I had recently endured for the J.R. Ward signing. (Totally worth it, by the way, the woman is a stand-up comedienne.)   I figured out this was no small deal when I saw that Barnes and Noble had taken over the smaller ballroom and set up an on-site bookstore. 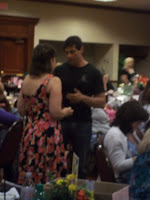 I wound my way through the crowds to the main ballroom.  Inside they were handing out raffle prizes.  I could see digital slide shows of book covers and trailers flashing to my right while waiters hustled to and fro to clean up lunch service.  Male cover models (hip dents anyone?) and life sized cardboard cuts-outs decorated the room as much as very colorful participants—some authors, some readers, some publishers.  Think feather boas and sequined hats and themed t-shirts.  My favorite was worn by a very large, intimidating man and it said, “Ask me about my wife’s books.”  Clearly this was a party and I had missed it. 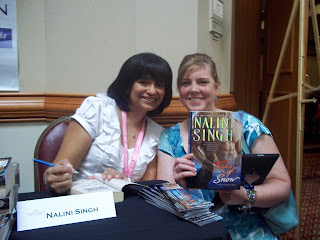 Determined not to miss anymore, I was second in line behind a woman who had driven 4.5 hours from West Virginia to get Singh to sign her 30+ books.  As I looked around, I realized there were tables and tables and more tables set up for authors, all making themselves available to readers for signing and chatting.  Scanning the room when 2:00 pm had come and gone, I finally saw Singh making her way through the crowds.  She wore a starched, white ruffled blouse, gray pinstripe slacks, and carried a soft pink leather purse.  While she does look like her picture in the jacket of her books, I found her to actually be much softer and prettier in person.  Perhaps it was the difference between living color and a black and white photograph?  While being quite petite, she has a smile the size of Texas.  Singh was one of the last authors seated because she had been part of a live internet chat/interview with Foster.  Apologizing profusely for being a mere four minutes late, she announced that she had brought “sparkly pens” to make up for her tardiness.  She then proceeded to sign ALL 30+ of Ms. West Virginia’s books. 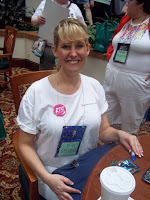 When it was my turn, she graciously took a picture with me and I asked if she had actually spent any time in San Francisco for that was what had originally drawn me into the Psy/Changling series, being born and raised there.  She replied in the affirmative and then asked me, “Did I get it right?”  I laughed, assured her that she did with one exception.  She referred to “old subway tunnels” which if you’ve ever been to the City by the Bay, you’d know are BART tunnels, not a true subway since it runs mostly above ground and is a monorail system, not at all unlike the ride at Disneyland.  And there aren’t very many of them.  Only a native San Franciscan would note that, however, and I grant her full leave to exercise literary license for the sake of storytelling.  The rats have love somewhere, right? 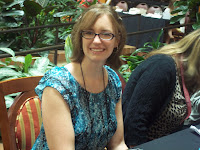 Over the next half hour, I met multiple authors and had them sign bookplates, the modern answer to having something for the author to sign if you’re an e-reader .  I learned that many of the authors are huge fans of each other–squealing, geeked-out fans.  Virna DePaul, Chosen by Blood, was so excited she got to sit next to Singh that I thought she was going to wet her pants.  She had a large stack of Singh’s books on the floor next to her own.  Jess Granger had a stack on her table too, although she turned them face down while she was signing her latest, Beyond the Shadows.  With first time published author Keri Stevens I discussed the advantages of different e-readers.  Donna MacMeans and I chatted about Victorian vs. Regency historical novels, she gave me an unpublished excerpt from her latest Redeeming the Rogue, which won’t be released until August of this year, and a peacock feather to adorn my hair since it was pulled up in a French twist.  The apparently hysterical antics of Dakota Cassidy at a recent conference in Columbus, Ohio was a source of great entertainment among readers waiting their turn to speak to the next author or their “must meet” list.  I ended up in a lengthy discussion about the pros and cons of classifying a book as either sci/fi or romance since romance sells more books, but many hardcore sci/fi fans who enjoy a little romance in their stories would never venture into the romance section. 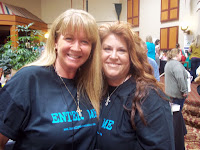 Rounding out my turn around the room, I obtained signatures from Linna Sinclair, Kristin Daniels, Margaret Ethridge aka Maggie Wells, Keri Ford, Shiloh Walker, Rose Maybud, Mary Burton, and a darling little old lady, Nell DuVall, who decided to write her first novel Train to Yesterday in 2008 to tepid reviews. You gotta give the gray-haired grandma props for believing she could pull it off.  Gayle Donnelly and Robyn MacKenzie were two women I’d love to party with and I’m looking forward to getting my hands on book one of their Infinity Series.

Next year!  Next year!  I promise to register and I’m taking Twimom227 with me!