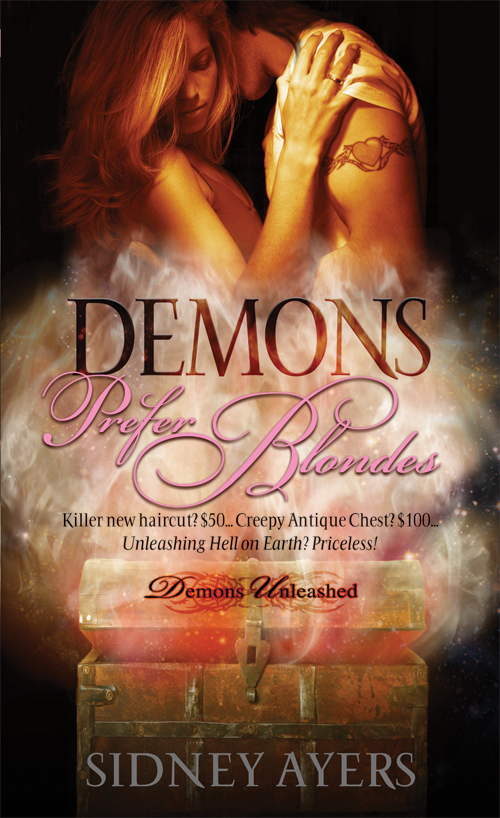 Author: Sidney Ayers
Release Date: June 7, 2011
Publisher: Sourcebooks Casablanca
Demons Unleashed Series #1
ISBN #: 978-1402251740
Genre: Paranormal Romance
Format(s): Paperback (416 pgs), ebook
I received a copy of this book from the PUBLISHER for the purposes of an honest review.
From the author’s website:
A BAD DAY FOR A DEMON…
Rafe Deleon is a senior demon and he resents like hell his assignment to Earth to retrieve the Chest of the Damned before it ends up in the wrong hands. But then he meets beautiful, intriguing succubus, Lucy Gregory, and she’s just unleashed a whole load of trouble…
REALLY SUCKS FOR A SUCCUBUS…
Lucy’s chic suburban salon has suddenly become the Underworld’s center of mass chaos and destruction. The only good in a day going rapidly down the tubes is the arrival of a gorgeous demon who’s adamant he can help her…
But Lucy has quite a few deeply unpleasant–not to mention deadly and hateful–surprises ahead of her. Surely there’s never been a worse time to tryout a new boyfriend…
What B is talking about:
Lucia Gregory is doing just fine, thank you. She’s got a steady clientele at her salon, a quirky, but devoted, assortment of friends, and has been successfully boyfriend-free for five years and counting. While she’s not complaining about the latter, her mother certainly is.
Rafael Deleon is a centuries-old member of the Paladin, a select group of demons allied with and blessed by angels. His sister has been captured by the Infernati (bad demons), the chest she was sworn to guard has been sent to Earth, and he’s been tasked with guarding a succubus who’s just come into her powers. Could things get any worse?
Of course they can! Ayers’ website boasts “Sinfully Snarky Paranormal Romance” and she’s not kidding. Demons Prefer Blondes firmly embraces the idea that while things might seem to be as bad as they could possibly be, they are likely to become much worse before all is said and done. Good thing her characters have a sense of humor—or, most of them do. Ayers keeps the funny stuff going throughout the novel, two of the best jokes being an amusing bit of alliteration concerning the toes of one of Lucy’s customers and the regrettable exposure of some gravitationally-challenged Santas.
Lucy doesn’t have a lot of moments of self-doubt, which should be a great thing for a heroine. Occasionally, however, it seems that a little more reliance on her friends would have saved her a lot of pain and frustration. Lucy does figure out that all of her loved ones are crucial to the battle she’s destined to fight eventually, and she’s able to not only survive, but also win the day because of it.
There’s only one sex scene in the novel, but there are lots of other sexy ones. It takes a while for them to finally cave in to their desire for one another, and several stops and starts within the scene itself, but once they do, Lucy and Rafe make it a good one. There are several scenes where Ayers just lets them react to one another that are electric and sweet at the same time.
Demons Prefer Blondes has a lot to offer, its most noteworthy charms resulting from the easy rapport and affection between Lucy and her friends, the humor Ayers liberally casts throughout the novel, and the erotic tension that’s present when Rafael is hiding behind his sworn duty instead admitting the truth of his own heart. It’s full of lively characters, some likable, some most definitely not, but nearly all memorable. I’m not sure where Ayers is planning to go with the next novel in the series, but I’m interested to find out.
B’s Rating:

GIVEAWAY:  I have two (2) copies (two winners) of Demons Prefer Blondes to giveaway here at That’s What I’m Talking About. Thank you to Sourcebooks (www.sourcebooks.com) for sponsoring the giveaway of Sidney’s newest release. To enter, please leave a comment and your email at the end of today’s review of Demons Prefer Blondes or yesterday’s interview with Sidney (link HERE).  One entry per person. Winners are restricted to US and Canada mailing addresses, only. Contest open from June 6, 2011 until Friday June 10, 2011 at 9:00 PM EDT. Two (2) winners will be selected from the comment entries using random.org.