Heart of the Highland Wolf 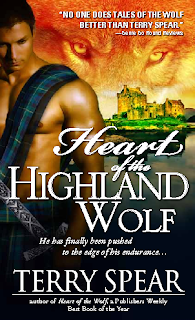 Werewolf series, Book 7
ISBN: #978-1402245527
Genre: Paranormal Romance
Format(s): paperback (416 pgs) ebook
I received a copy of this book from the PUBLISHER for the purposes of an honest review.
From the author’s website:
Ian McNeill, laird of Argent Castle finds his capital squandered through unwise investments and the wolf clan’s home that has been theirs for centuries is in danger of being forfeit for nonpayment of taxes. When a movie producer contacts him with the notion of using his castle to produce a movie, Ian abhors the idea, but it’s his only salvation. Even worse, his people become extras in this epic Highland movie. But when one American werewolf romance author, Julia Wildthorn, slips into the castle under the guise of being with the movie company, except she is trying to jumpstart her muse with writing a book set in old-world Scotland–specifically about his castle and his people as the characters in her newest book venture–she and Ian tangle.
What B is talking about:
Despite her Scottish roots, Julia MacPherson has been building a successful career in America as a writer of werewolf romance novels under the penname “Julia Wildthorn,” and with little wonder. She herself is a lupus garou: a werewolf. Unfortunately, she’s got a novel due but is having a nasty case of writer’s block. So, when her friend Maria heads to a genuine Scottish castle as part of a movie production crew, Julia tags along for inspiration. It should be easy, except that the very same castle holds a family secret: one she’s been ordered by her grandfather to steal and return.
Ian McNeill has given up on finding a mate after the disastrous first attempt he made long ago. Instead, he now devotes himself fully to his responsibilities as laird of his clan, a task that’s become increasingly difficult since an investment scheme left the clan nearly bankrupt. When an American film crew negotiates to use his estate as the location for their movie, he knows he has no choice for the sake of his people but to accept their offer. But he doesn’t have to like it. He intends to fight them all the way, until a beautiful redheaded American changes his mind.
Having read a lot of novels with Weres/shifters of varying sorts, I was prepared for a fairly predictable take on werewolves from Heart of the Highland Wolf. While there were some clichés, Spear does well with her wolves, and ties in enough true wolf behavior with her version of the Weres to keep the novel fresh. Her werewolves are both born and turned, are sensitive to the phases of the moon without all being slaves to them, and equate “pack” to family with all the humor, frustration, and affection the word entails.
Spear has written each novel in her Werewolf Series as a standalone, so there wasn’t a learning curve required to get into Heart of the Highland Wolf. Bless her. She also limits the setting to the specific locales where the action takes place, so she’s able to give plenty of details for the sake of imagery without skimping on the story itself.
I liked Ian and Julia much more once they became a couple than I did when they were trying not to be. Their “dance” around one another, while fairly predictable, wasn’t a very comfortable one. The attraction versus ineffectual denial that is somewhat common to the genre seemed more a necessary device than the erotic tension I got the impression it was meant to be.
Once they give in to one another, however, they are hot. Spear has a knack for writing yummy sex scenes and gives her couple quite a few. Ian and Julia revel in each other, both thoroughly enjoying the teasing, wanting, taking, and having that they find together. It works, with Ian’s Alpha assertiveness complimenting Julia’s modern sexual sensibilities.
Spear packs a lot into Heart of the Highland Wolf, combining action, intrigue, compelling characters, and magic into an all around good read. Though some aspects of the novel left me wanting, she makes up for it in others. If a quick, sexy story that embraces the familiar without being stale is what you’re looking for, this just might hit the spot.
B’s Rating:

7 responses to “Review: Heart of the Highland Wolf”