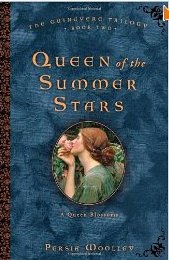 Queen of the Summer Stars

Author: Persia Woolley
Release Date: 1 June 2011
Publisher: Sourcebooks Landmark
Guinevere Trilogy book # 2
ISBN: #978-1402246401
Genre: Historical Fiction
Format(s): Paperback (512 pages), e-book
We received a copy of this book from the PUBLISHER for the purposes of an honest review.
From the author’s website:
In a country still reeling from the collapse of the Roman Empire, the young King Arthur and his wife Guinevere struggle to keep the barbarians at bay even as they establish the Fellowship of the Round Table. The spirited and outspoken Guinevere skillfully combats an accusation of planning to poison Arthur in a country simmering with unrest and scandal. But Guinevere’s greatest battles are dangers Arthur cannot see-ones she’ll have to fight on her own. And all the while, she must reconcile her thirst for freedom with her duties as queen, and her growing love for Lancelot with her loyalty to her husband. Vibrantly human and touchingly real, Guinevere reigns as a woman poised to discover the true peril and promise of the human heart.
What Gikany & Una are talking about:
Queen of the Summer Stars is the second novel in the Guinevere Trilogy. The book opens with Guinevere being summoned to Arthur’s dying mother’s side. The novel follows Arthur’s and Guinevere’s lives from shortly after their wedding until Mordred comes to live with them. Included within this story, are the stories of Tristen and Insolde as well as the story of Arthur’s parents told from Guinevere’s point of view.
Una mistakenly volunteered to read this book for Twimom (volunteering Gikany along with her) thinking that it was a historical romance. Let us be very clear, it is not. This is definitely historical fiction. When we looked at Amazon to verify the genre, it is strangely not listed. We discovered the genre by looking up the author on the Wikipedia. Sadly, Una felt it read like a textbook, one with really interesting antidotes, but a history textbook nonetheless. Was the story interesting? Yes, however, this is not our type of escapism reading. We thought it was going to be something it is not and were disappointed. The blame is solely ours. We felt that the book started out a bit slow but livened up in the second half. True historical fiction lovers and true Arthurian legend fans would really enjoy Queen of the Summer Stars.
There are a couple of character points that were a little off. We understand and accept how this period thought of women and treated them. Guinevere was characterized as an independent and strong-willed woman. For a woman who thought of herself as a queen who would rule at the king’s side, she seemed to be meek with Arthur. She didn’t seem to show any backbone or strength with him, she just let him lead her around like a very obedient dog. It was also startling to see her afraid to ask her a servant questions. It may have been primarily because he was male not just that she thought the question was too personal.
Again, we need to state that we mistakenly picked this up to read, thinking it would be something completely different. That being said, even with the characterization issues, we felt it was an interesting read and would really appeal to those that love historical fiction. If you love Arthurian legend, you should pick up Queen of the Summer Stars.
Their Rating:

Liked it, there were a few issues – recommend (B)

One response to “Review: Queen of the Summer Stars”