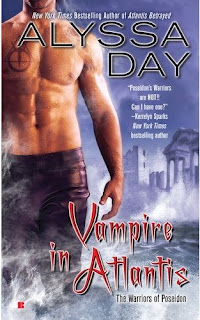 Vampire In Atlantis
Author: Alyssa Day
Release Date: June 7, 2011
Publisher: Berkley Sensation
Warriors of Poseidon #7
ISBN: #978-0425241790
Genre: Paranormal Romance
Format(s): paperback (336 pgs), e-book
I received a copy of this book from the PUBLISHER for the purposes of an honest review.

The most unexpected of all allies to Poseidon’s warriors has proven to be the fiercest—Daniel, a vampire and Night Guild mage. But even the strongest alliance can be destroyed when an 11,000 year-old desire is reborn…

A vampire’s oath, a maiden’s quest…

Daniel, vampire and ally of the Warriors of Poseidon, has fought on the side of humanity—even against his fellow creatures of the night—for more than 11,000 years.  But the crushing weight of futility and the reality of always being starkly, utterly alone has forced him to finally give into despair. He took the first step into the sunlight that would destroy him—and instead walked into Atlantis.

And the blackest of magic that could consume them both…

Eleven thousand years ago, Serai was one of a group who agreed to be placed into magical stasis to ensure the future of the Atlantean race. When a dark sorceress steals the gemstone that protects her sleeping sisters, she awakens to a vastly changed world—and the one man she could never, ever forget. And with an ancient evil tracking their every step, the long-lost lovers must battle both the darkest of magic and the treacheries of their own hearts.

After leaving the country and main story-arc for the previous book, Atlantis Betrayed, we find our way back to Atlantis and the US. Last we saw the vampire known as Daniel, he had taken over as Primator, Ruler of the Primus, the third house of the US Congress.  In Ms. Day’s world, vampires and shifters revealed themselves to humans roughly ten years ago and are slowing taking over life as we know it. A small band of human rebels have aligned themselves with “good” shifters, vamps and the Atlanteans to protect humans from the evil.

At the beginning of Vampire in Atlantis, Daniel decides to give it all up and end his life with the true death, being burned by the sun. As he awaits the first rays to hit his skin, he is pulled into a magic portal, arriving in Atlantis at the feet of his thought-to-be-long dead true love (we are talking 11,000 years “dead”). The two escape Atlantis and begin an adventure to search for the Emperor, one of the missing, mystic gems from Poseidon’s trident. They are in a race against time, for the Emperor is being misused by a witch and each drawn on the gem’s powers places Serai closer to death.

I have to say that after the last two books in the Warriors of Poseidon series, this one pales in comparison. While still a good story, at times the dialogue between the main characters or other Atlantean warriors felt choppy and forced. Likewise, it took me a long time to warm up to the romance between Daniel and Serai. The Daniel we’ve read about in the prior books was one of strength, yet in this story, he had given up and was ready to end it all. I don’t recall such strong depression in early books. In addition, Serai, who was in stasis for 11,000 years, fluctuates between a modern, strong-willed woman and one lost from all those years ago. (She was “fed” information annually through magic so that she was up to date on current events and lingo, but there seem to be some gaps in her education, as well as a bit of information overload.) With that said, the couple grew on me over the course of the book, so that by the time the heroic sacrifices are made and the climax occurs, I felt the sting of injustice in my heart and held a tear in my eye.

The story also involves another regionally powerful vampire, Nicholas, a sorceress, Ivy and her young teenage son, Ian.  Once again, I enjoyed their story line, and hope this isn’t the last time we see them; however, I had some issues with the characters and events. In the beginning of the story, Ivy comes across as a power-hungry witch that dabbles in the dark arts–someone that cares little about her “underlings.” Likewise, Nicholas is a blood-thirsty vampire with his eyes set on US domination. However, both characters change significantly over the course of the book – which is fine, when justified. However, I felt that Ivy just changed without due course or explanation, while Daniel’s behavior was written off that he has always been hiding his true nature. I didn’t feel that the characters, particularly Ivy, were changed because of the events taking place around them.

Finally, the story brings in a military branch of the government sort of out of no where – their actions never fully explained and their departure a bit too abrupt for my satisfaction. I would have like to seen their involvement from the beginning of the book. And don’t get me started on the “spirit of the portal.”

With all that said, I did like the book and felt it was a worthwhile, enjoyable read and an integral part of a great series (one on my auto-buy list). Even the strongest series have a weaker book from time-to-time. The book forwards the overall story arc and brings us once step closer to seeing Atlantis rise to the surface. I highly recommend this series for paranormal fans looking for something a little different than the norm. This book can be read as a stand alone – Ms. Day does a good job of bringing the reader up to speed on any relevant pieces of the backstory.

2 responses to “Review: Vampire In Atlantis”